Astro Gold is an iOS astrology app. Solar Fire and Solar Fire Gold is an astrology Windows program. These applications save their chart files with the extension SFcht. These files can hold information for one or more charts.

These SFcht files (eg ‘my charts.SFcht’) can be exported from Astro Gold and Solar Fire via email or copied from your Solar Fire Charts folder. The files can then be copied to the AstroConnexions app folder in

Dropbox. Then they can be imported into AC.

The following screenshots show a method of exporting SFcht file via email using the Solar Fire Windows desktop program. To keep things simple, only one chart is selected for export/import.

If a particular chart cannot be imported straight away into AC a procedure that uses forward geocoding retrieves the unresolved details, usually the latitude and longitude of the chart. This allows the chart to be saved to AC. The charts without any problems are automatically saved to the AC database. More details below.

The AstroConnexions folder, and the Apps folder is created by AC via the Dropbox api. Do not create these folders yourself.

Note: Currently the import routine cannot handle SFcht files available from the Databank ADB database These SFcht files can be very large and hold thousands of charts which may cause AC to crash with an out of memory error. Therefore you are advised to only use the method outlined here to create SFcht files for export to AC.

Email SFcht files to yourself – this us the Windows Solar Fire procedure. 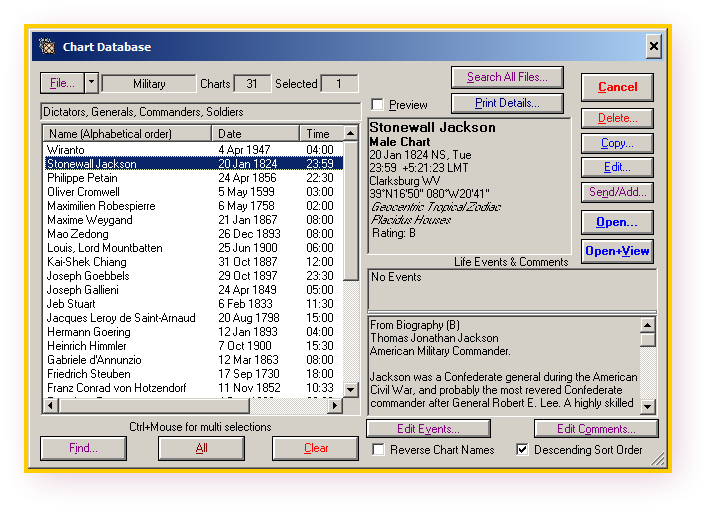 Exporting a SFcht chart file – selecting a chart. Note many or all charts can be selected for export/import. (Fifty approx max) 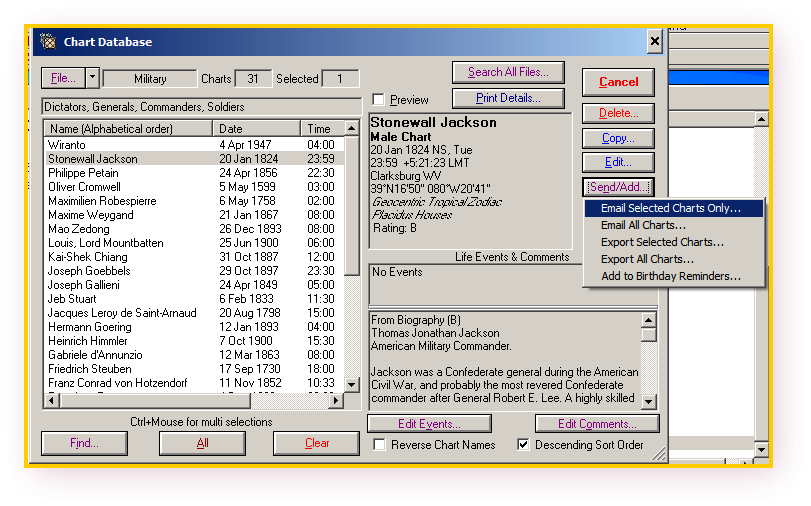 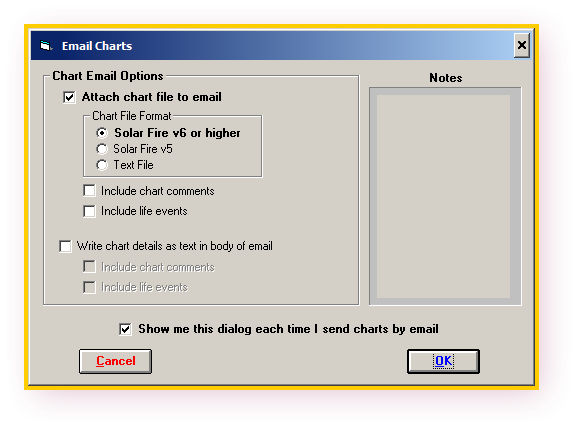 Path to the your (new) Solar Fire chart files is:

Animated GIF – Creating a SFcht file from a selection of chart files. 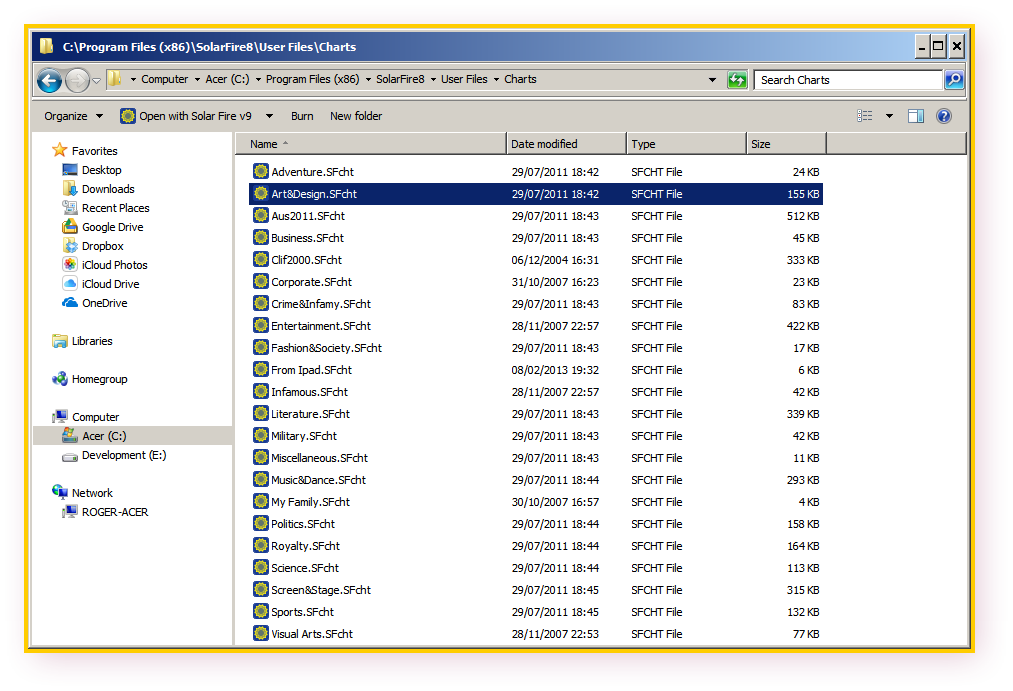 The above files can be safely used to import SF charts into AC.

The procedure to email Your Chart Files from Astro Gold is not too complicated.

1. email the SFcht to yourself.

2. Open Dropbox app on your iPad if not done so already. Save attached SFcht file (from email app) to Dropbox AstroConnexions folder.

3. Connect to Dropbox if not done in AC. Tap import SFcht charts in AC. See below…

Selecting MyCharts for Export by email 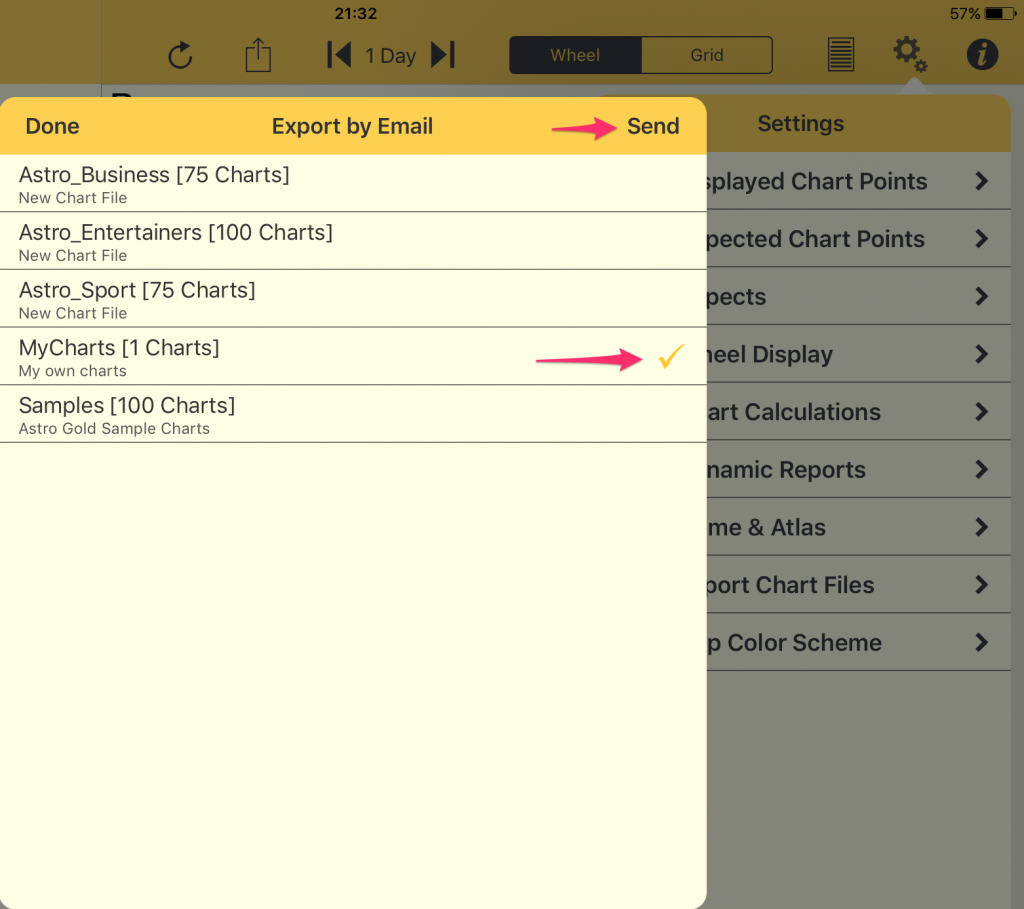 The procedure to copy the SFcht file into you AstroConnexions Dropbox app folder is shown below. I use Spark (email app) on my iPad. Screenshot from standard iOS Mail app shown too. Use the share button/selection in your email to copy the SFcht file to the AstroConnexions Dropbox app folder. The procedure is identical for Solar Fire Sfcht files and Astro Gold SFcht files.

Email procedure on my iPad 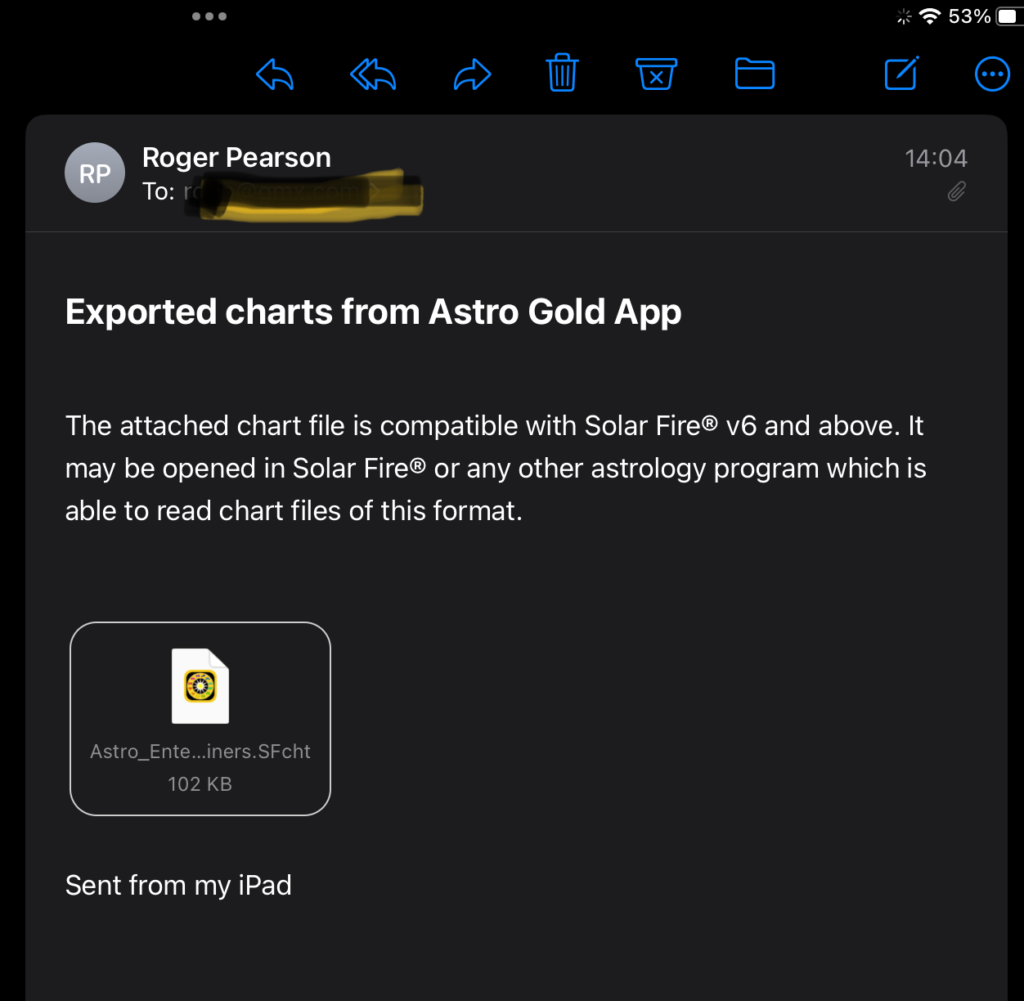 Exported charts from Astro Gold App. Long- press over the attached file, and save 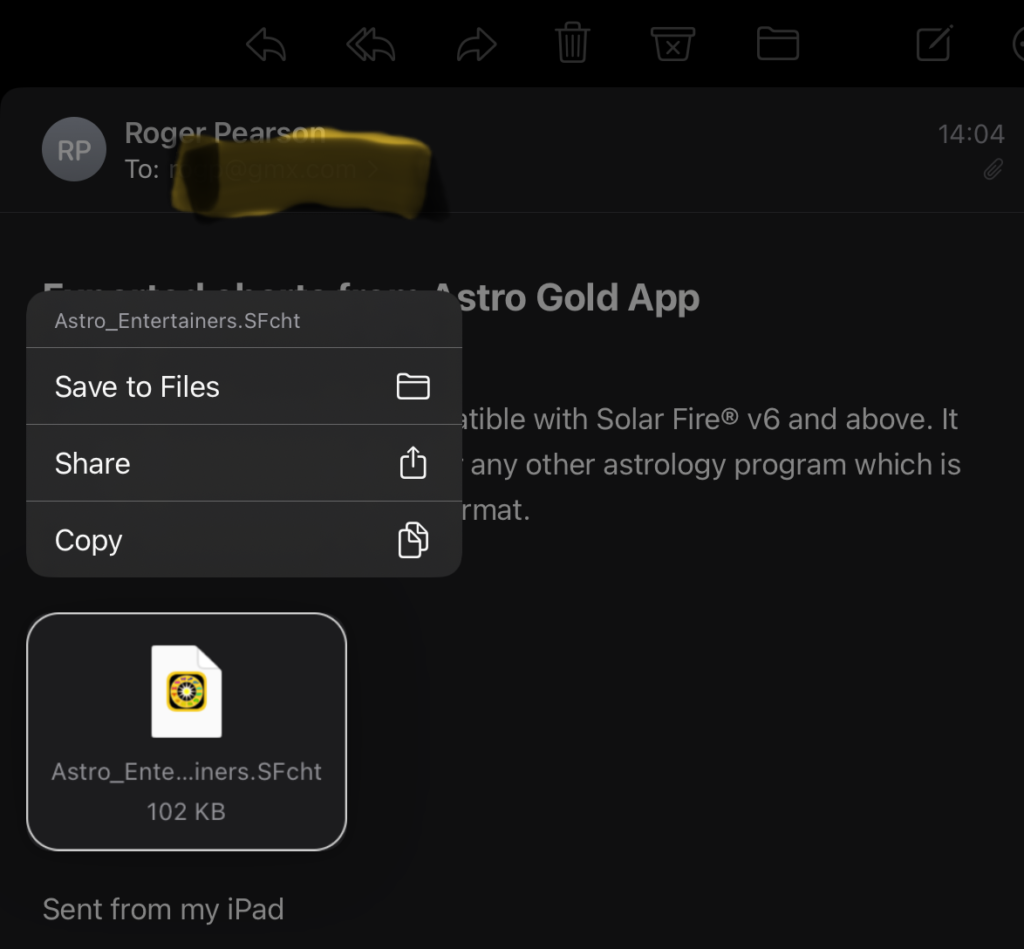 Exported charts from Astro Gold App – Save to Dropbox 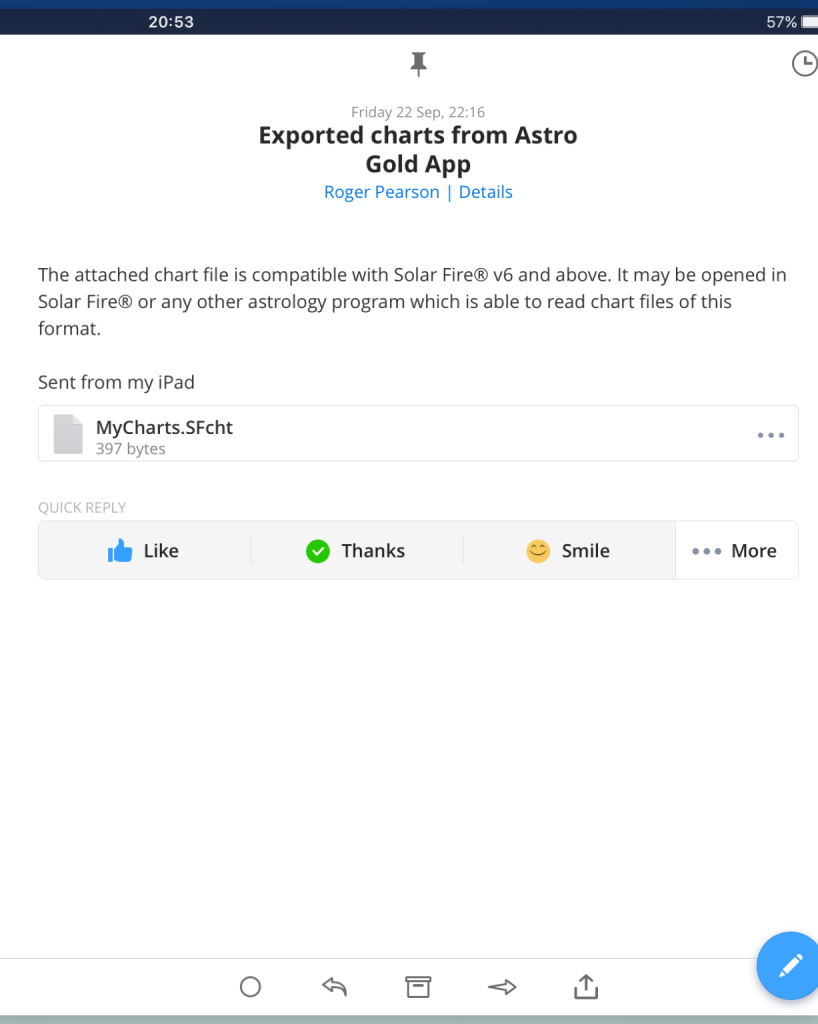 Email with the SFcht file attachment 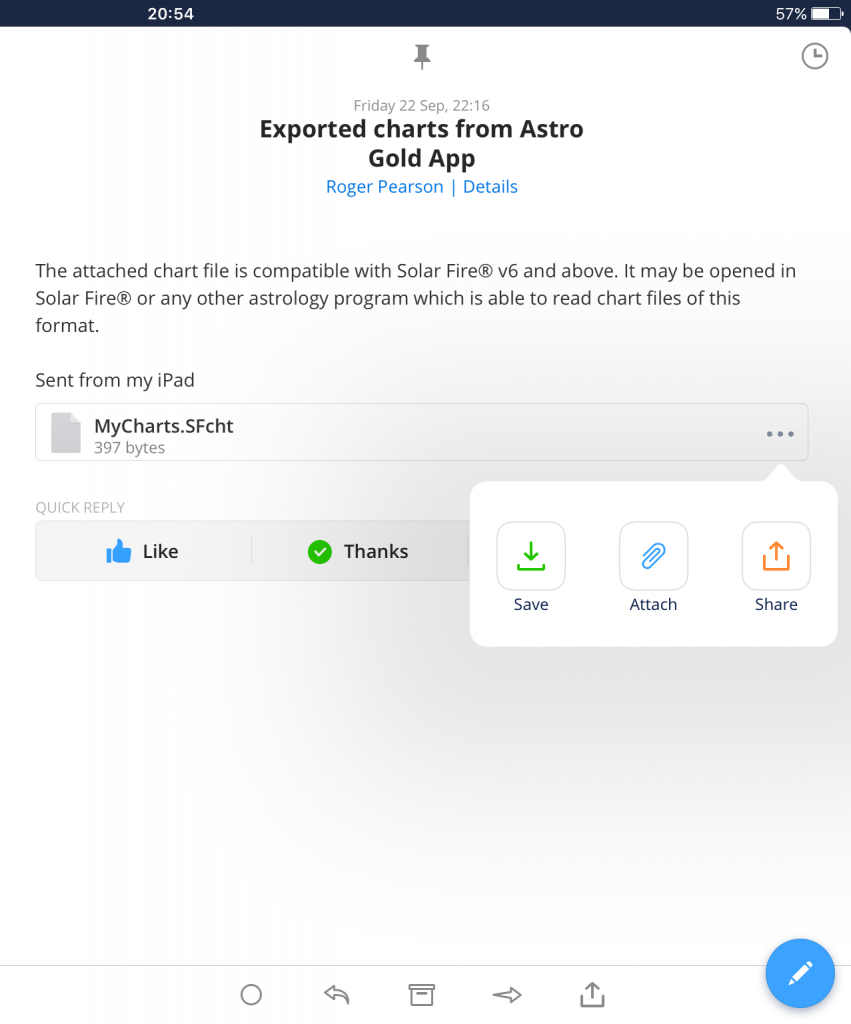 Selecting a method to put the file into Dropbox. Select Save or Share. 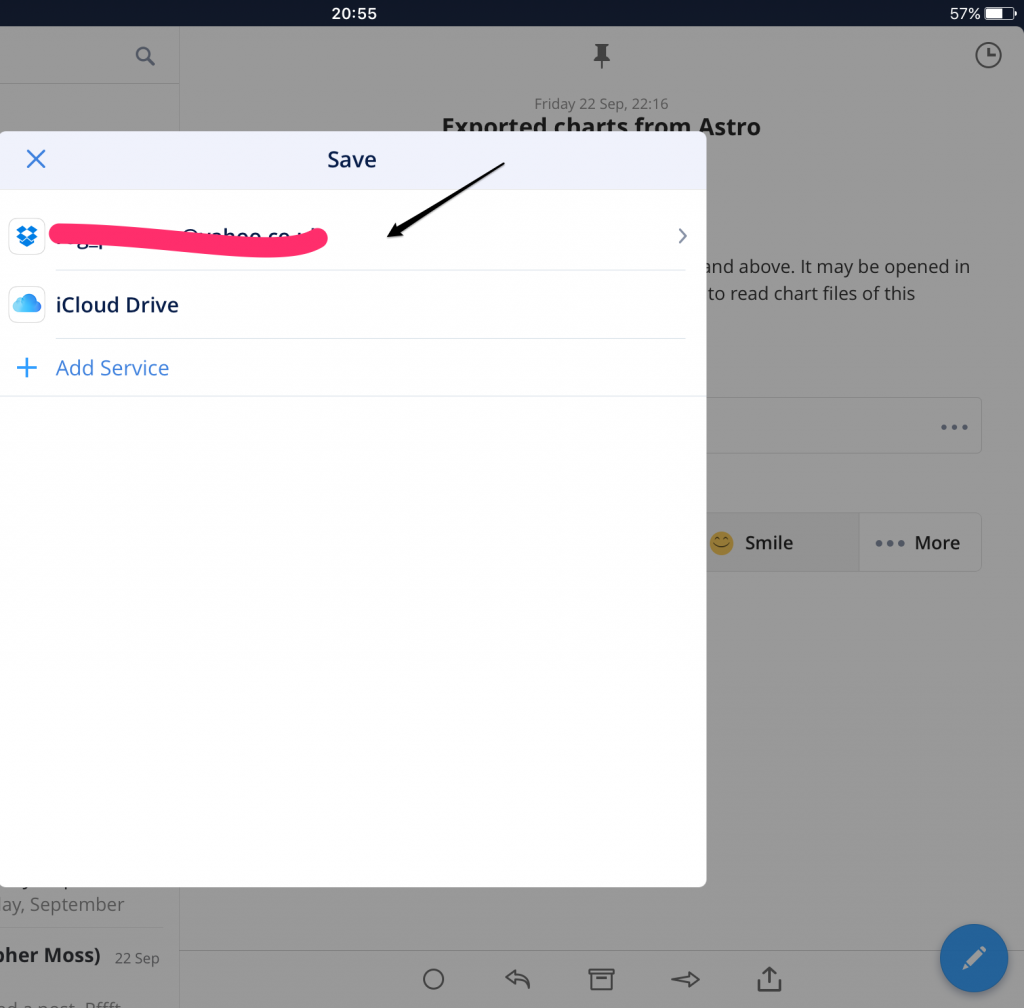 Selecting Dropbox from the resultant Save selection.

Selecting the correct folder. Please note the AstroConnexions folder, and the Apps folder is created by AC via the Dropbox api. Do not create these folders yourself. 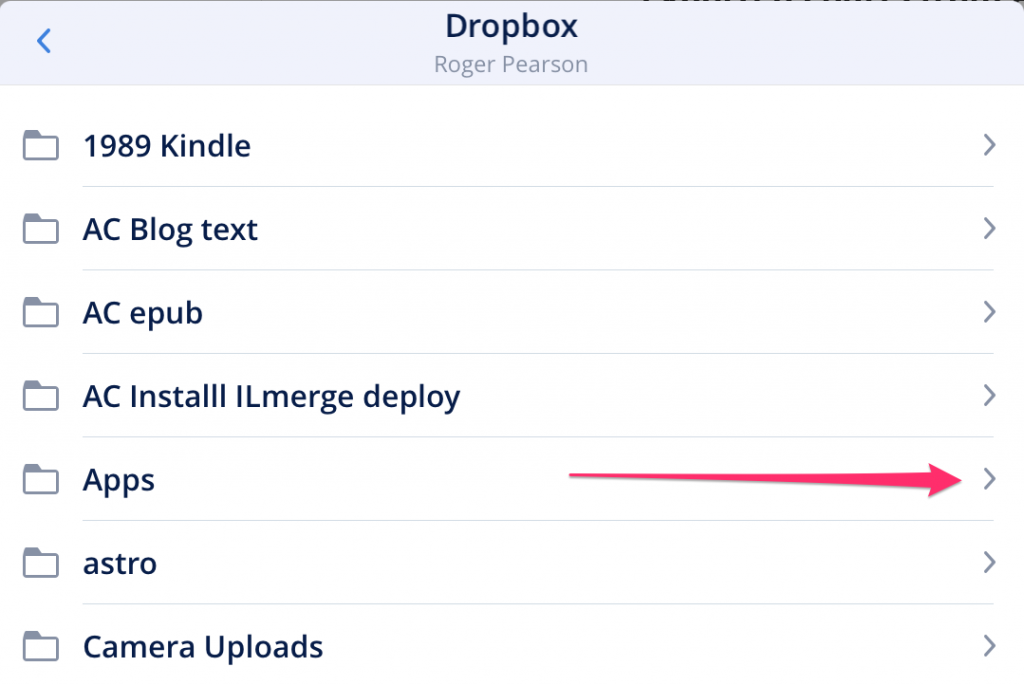 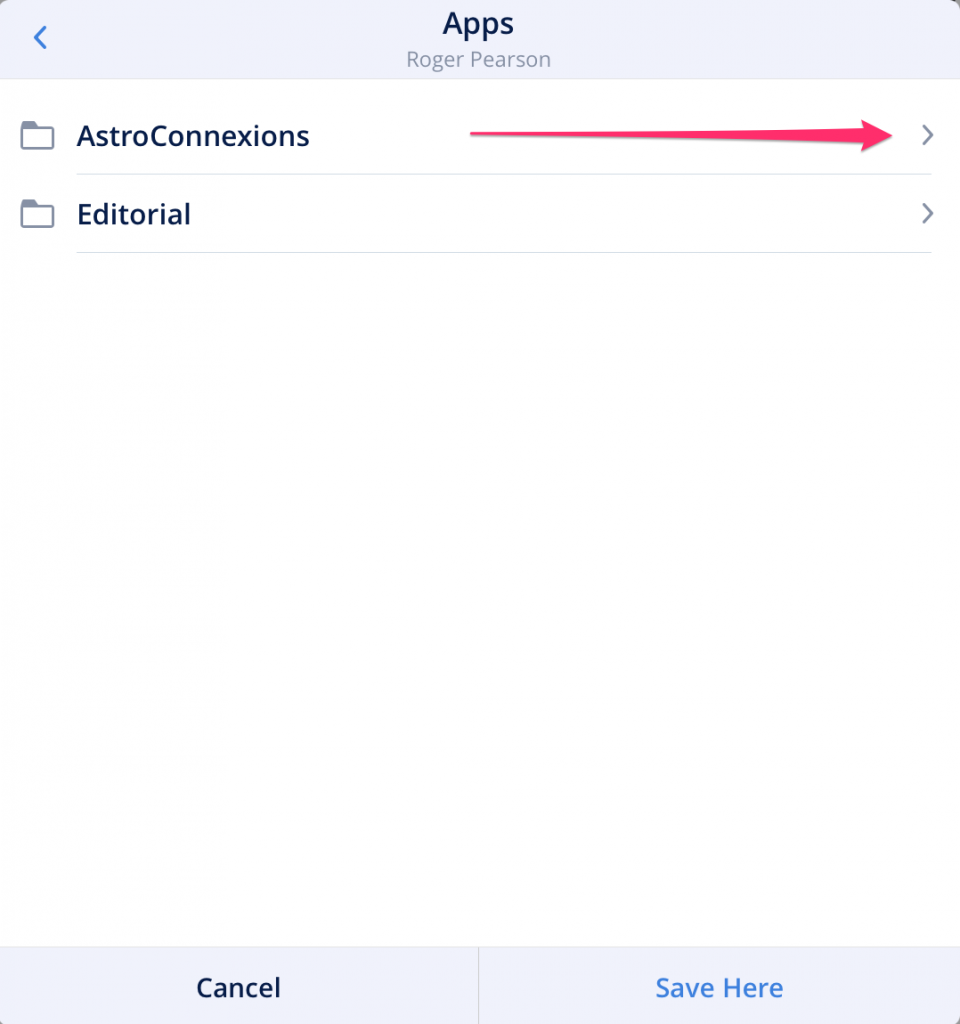 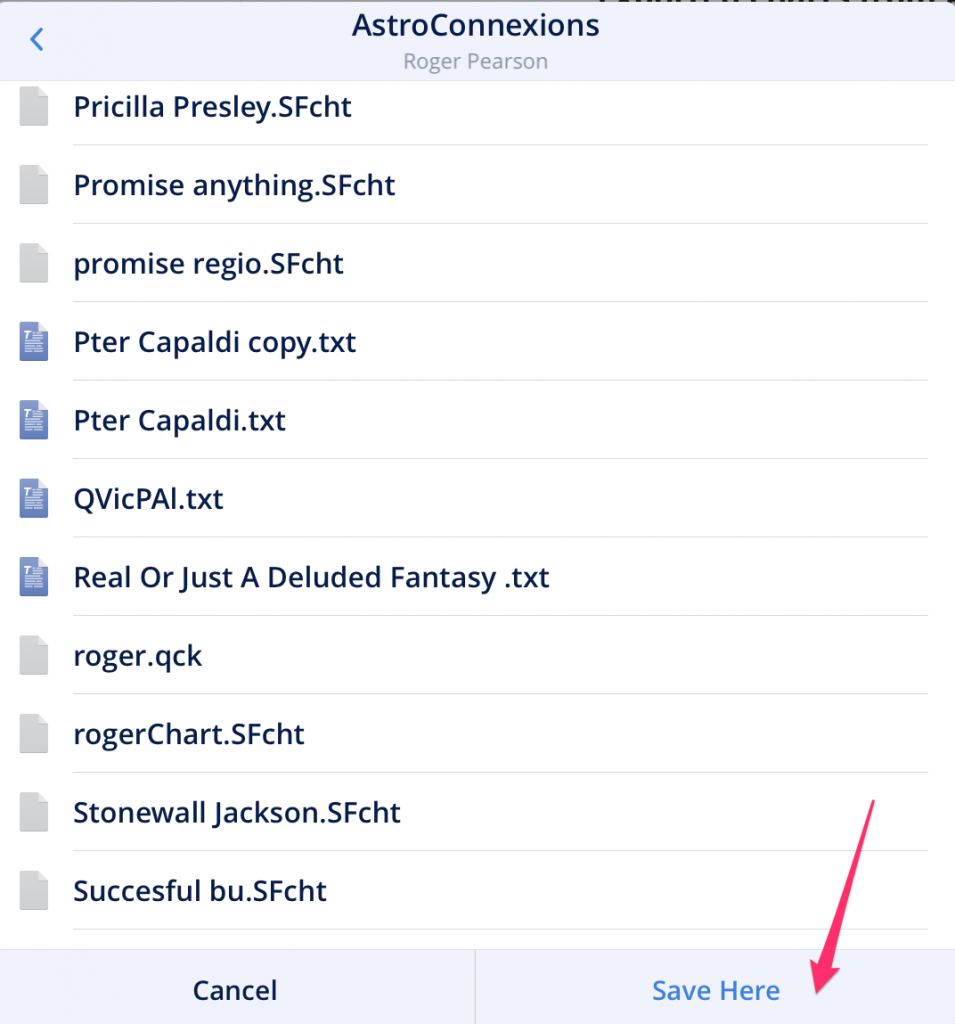 Save your file here

A similar procedure can be followed if you have a Mac.

Importing the file into AC

Note that the first time you connect to Dropbox the import table may be blank so you may have to exit the AC Import form and open again to refresh the Import table – your SFcht file will then be displayed. 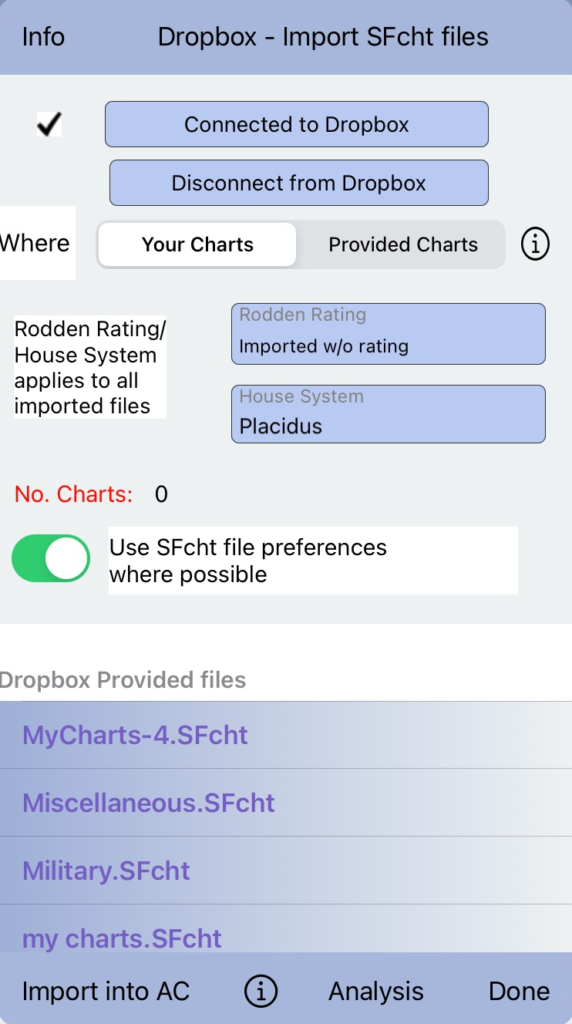 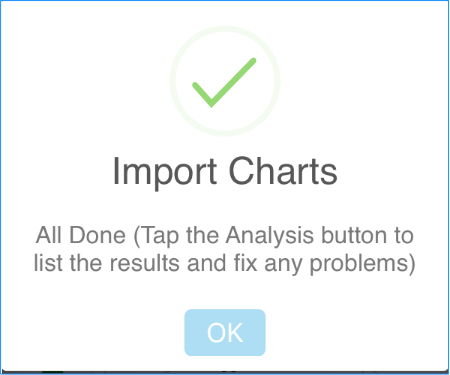 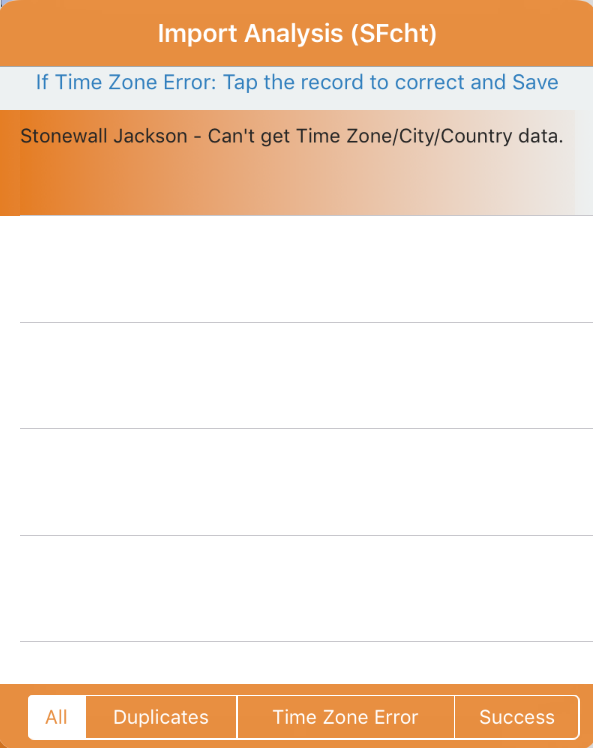 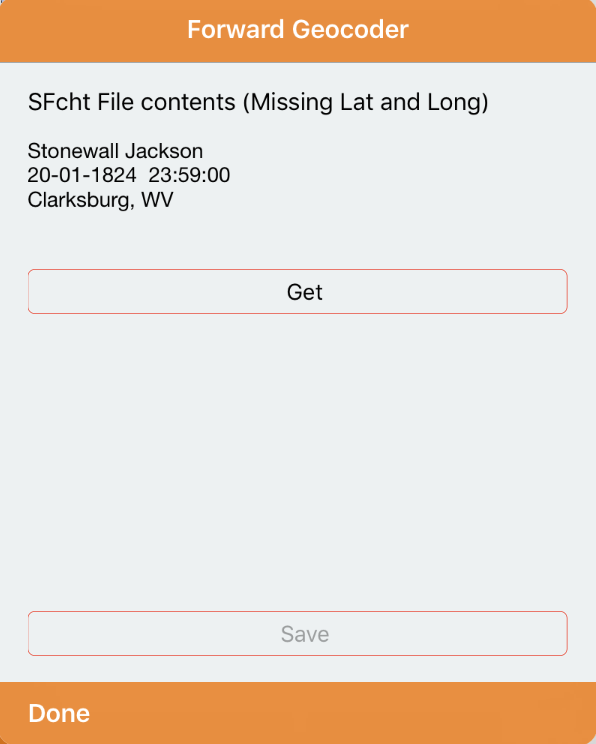 Forward Geocoder, and analysis of the date/time etc. 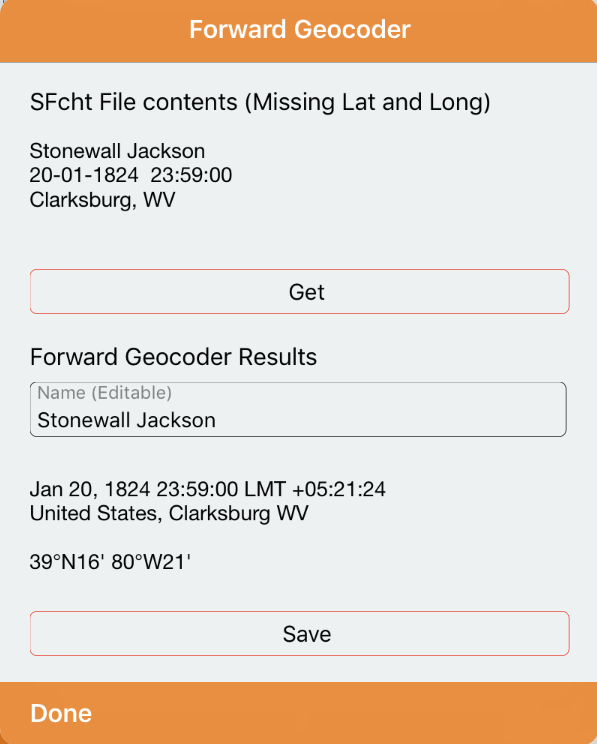 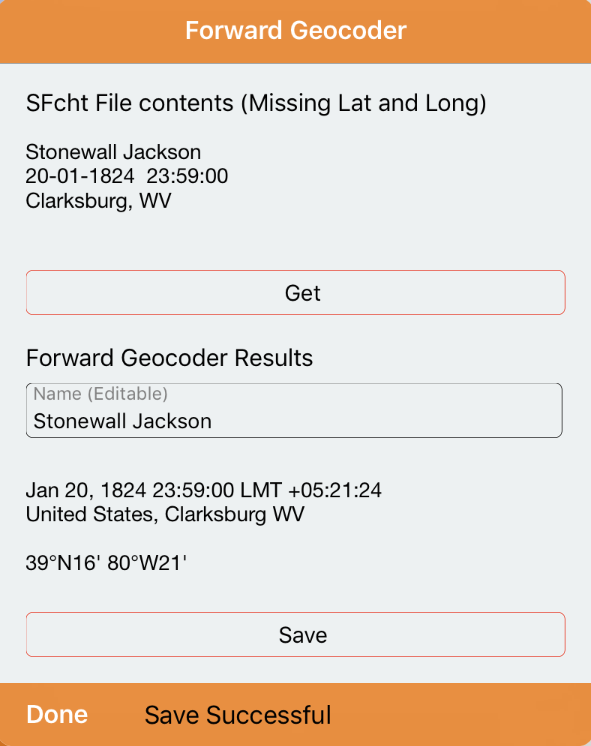 Saving the Chart. The chart is automatically saved to AC.

Checking that the Rodden Rating is correct. 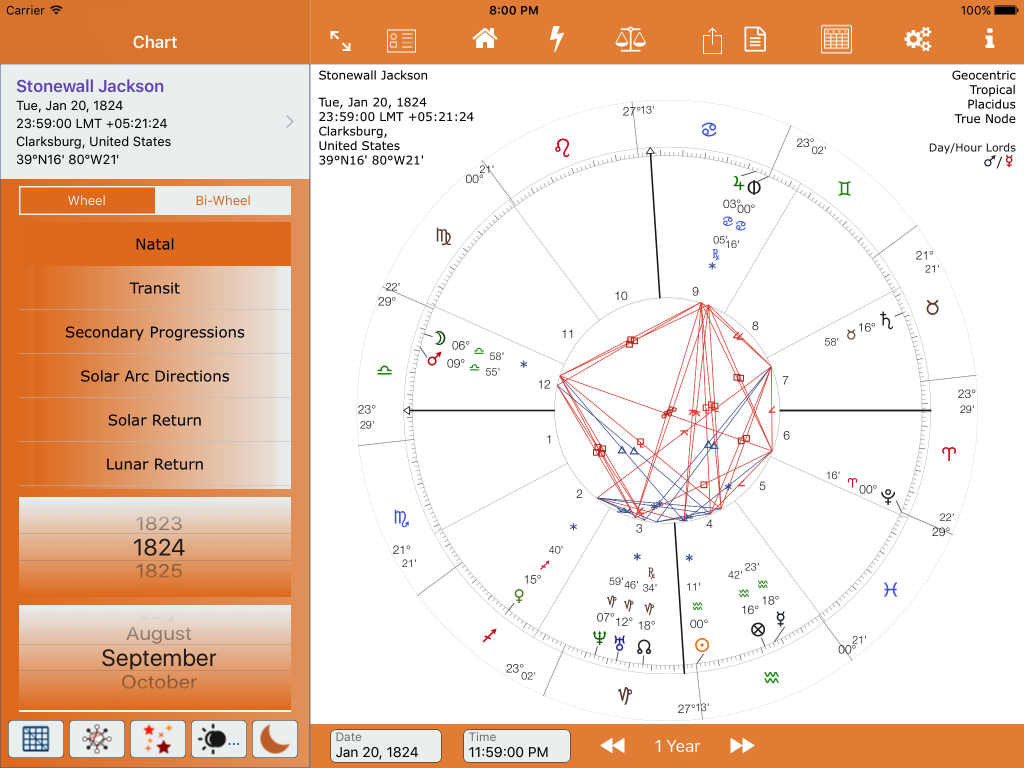 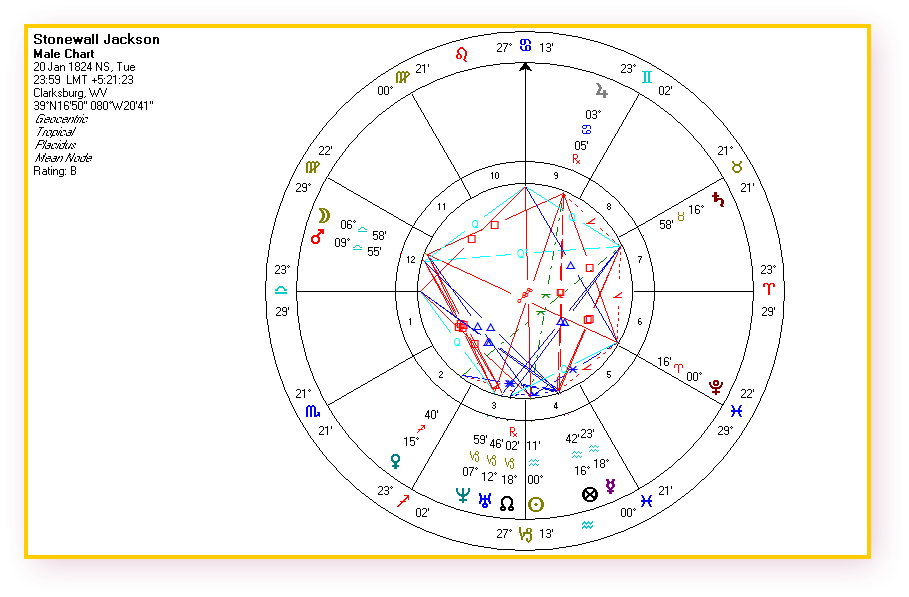 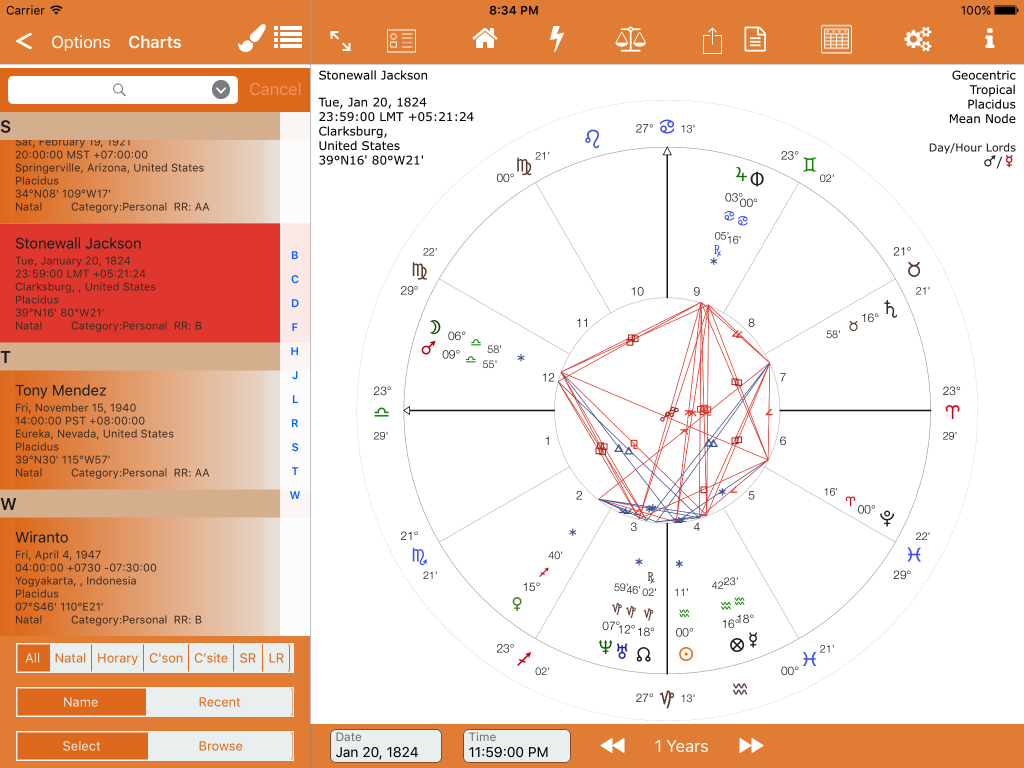 An example of a list of successfully imported SFcht files 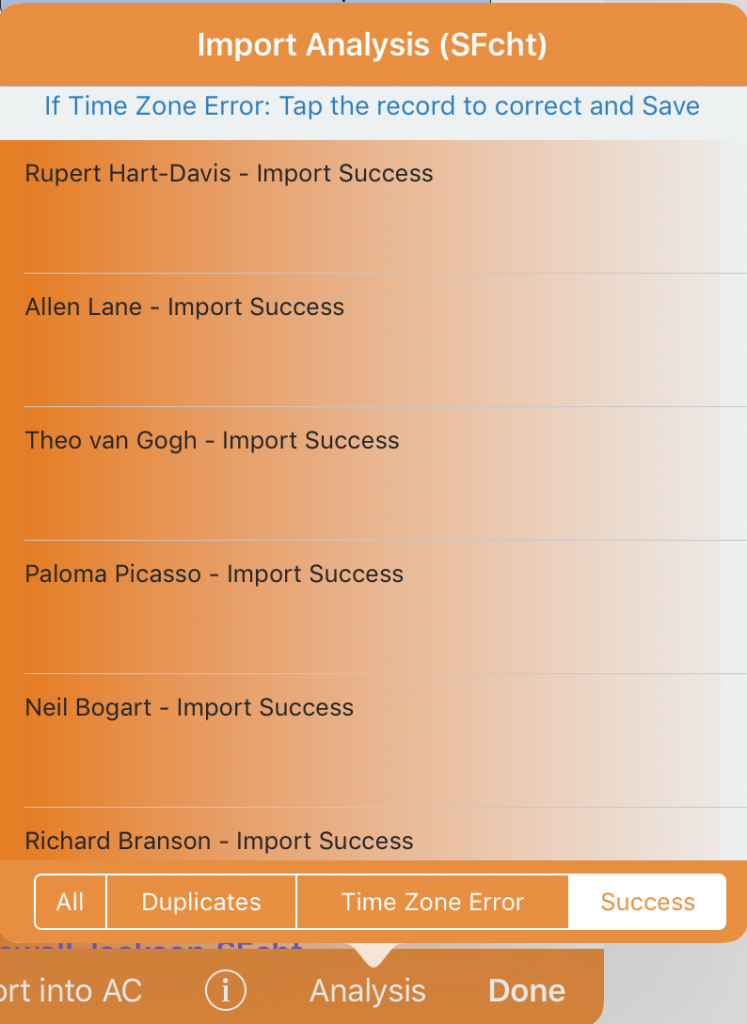 An example of a listing of already imported SFcht Files 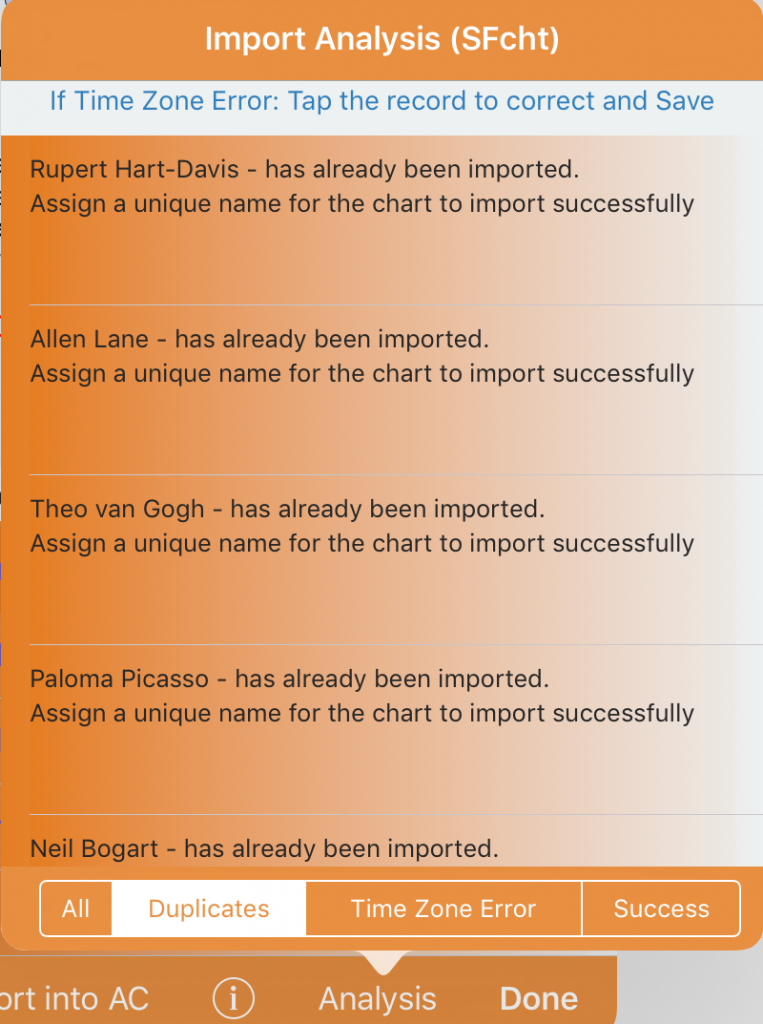 SFcht chart files are binary and cannot be examined like a CSV file.

Solar Fire files – have an entry for the House System and Rodden rating.

To use the Rodden Rating and House System on the AC form switch off the ‘Use SFcht file preferences where possible’.

Transit, progressed or other charts are ignored if importing them.

Why doesn’t AC process geocoding as a batch? This would make the AC import process much faster. Apple applies a restriction:

The geocoding service which supports CLGeocoder is not meant to batch geocode locations, but is meant to be used as necessary as the device moves, and places and addresses need to be shown to the users. Selectively and sparingly. If you must, the general rule of thumb is to not send more than one geocoding request per minute.