Provided Charts and Your Charts

The Difference between Provided Charts and Your Charts

Provided charts are those that come with AstroConnexions when you purchase it. These charts are mainly from AstroDatabank.

are those that you have

2. Imported from Solar Fire or AC or from provided files on the AstroConnexions website.

Note that when importing Chart files you are given a choice as to where you want them to be stored. Example: 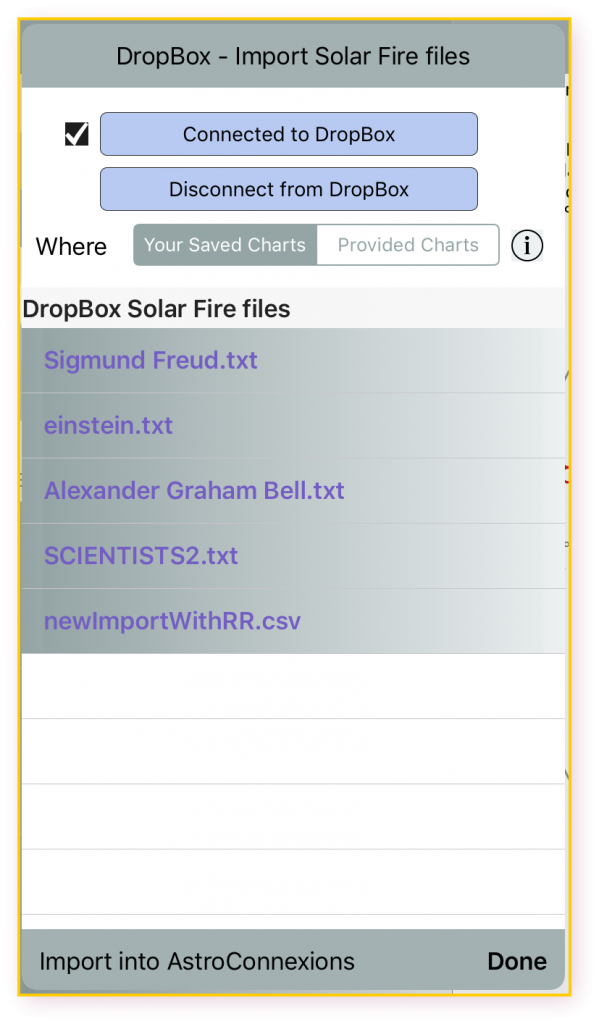 It is recommended that Your Charts database should hold your personal charts, imported charts and any chart that might require editing.

Note that charts in the Provided Charts database cannot be edited (this does not affect their use in AstroConnexions in any other way). However, they can be copied to the Your Charts database where they can be edited. For example, the chart name or latitude can be changed.

Note also that the Your Charts database is backed up to iCloud.

Provided charts are usually AA Rodden rating so they won’t usually have to to be edited.

Charts saved/imported as Your Charts are backed up to iCloud automatically. Charts imported to Provided Charts are not.

Recent Posts
Recent Comments
Archives
Categories
We use cookies to ensure that we give you the best experience on our website. If you continue to use this site we will assume that you are happy with it.OkNo