for Progressions and Directions to the radix

Specifically: Secondary Progressions and Solar Arc Directions to the radix. Including basic strength and debility calculations for the aspect.

For Your Charts and Provided Charts.

What is meant by a report?

A report is usually an analysis of a particular part of a chart. A report maybe an analysis/understanding of the whole chart. For AC, reports (text stored in AC’s database) are available for aspects (although not all aspects) to the radix from Secondary progressions, and Solar Arcs. The analysis/reports are taken from copyright-free books and stored in your AC’s database.

What aspects are reported? Conjunction, Sextile, Trine, Square and Opposition.

Note that the sextile and trine give the same report. The square and opposition are considered the same for the reports. From the AC Report Settings 45 and 135 degree aspects can be associated with the Square and Opposition reports.

The Progressed Horoscope by Alan Leo, 1906

Note that Leo states: Mercury Trine, Sesquiquadrate, Quincunx, Opposition to Venus secondary progressed aspects cannot be formed during the normal span of earth life. This restriction does not apply to solar arc aspects, but because Leo’s reported aspects are only secondary progressed the Solar Arc aspect reports are not included.

View/Inspect AC’s Reports Database (the text is not editable) 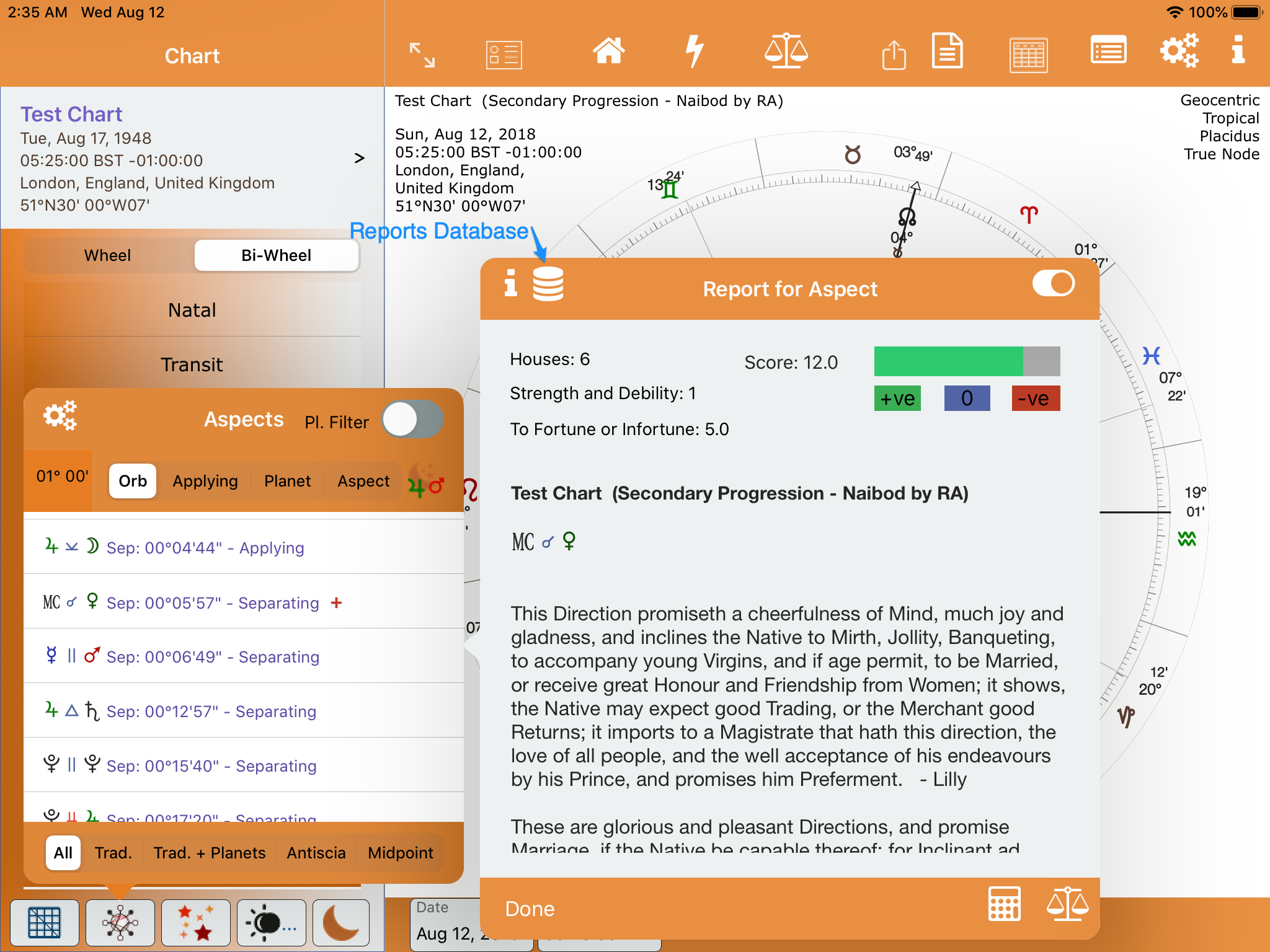 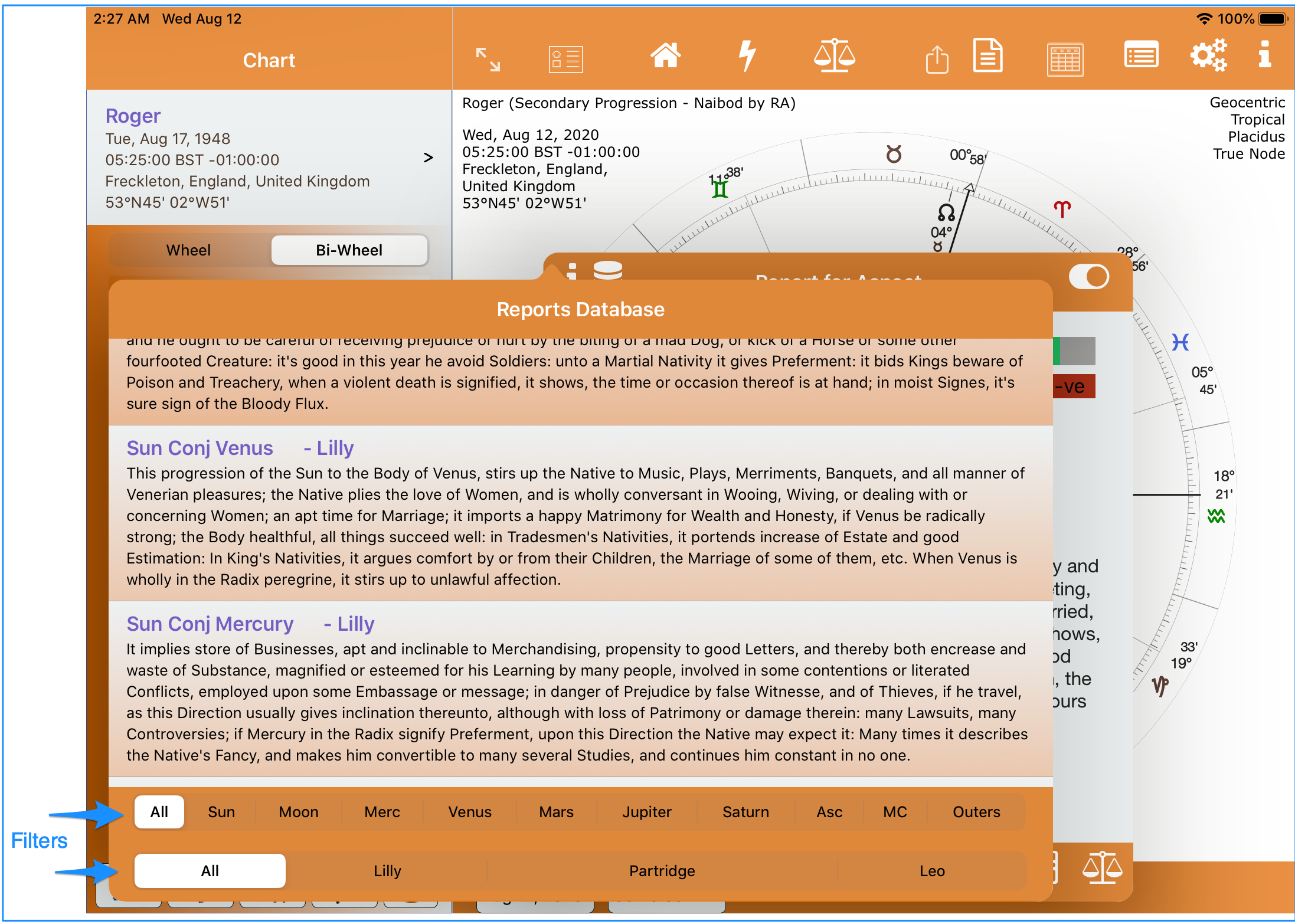 How does this work? Using AC’s Reports:

When as aspect perfects or is within its assigned orb on a particular date/year it is shown in the Aspect Table. In the example below Al Pacino’s 1966 secondary progressed aspects to the natal chart is shown in the Aspect Table. If an aspect has an associated report a + marker is appended to the aspect record. Long-press this record shows the aspect report. He has an Asc Trine Jupiter aspect that has an associated report.

The Al Pacino chart can be opened from your Provided Charts if you wish to follow the following instructions to get the exact same results. 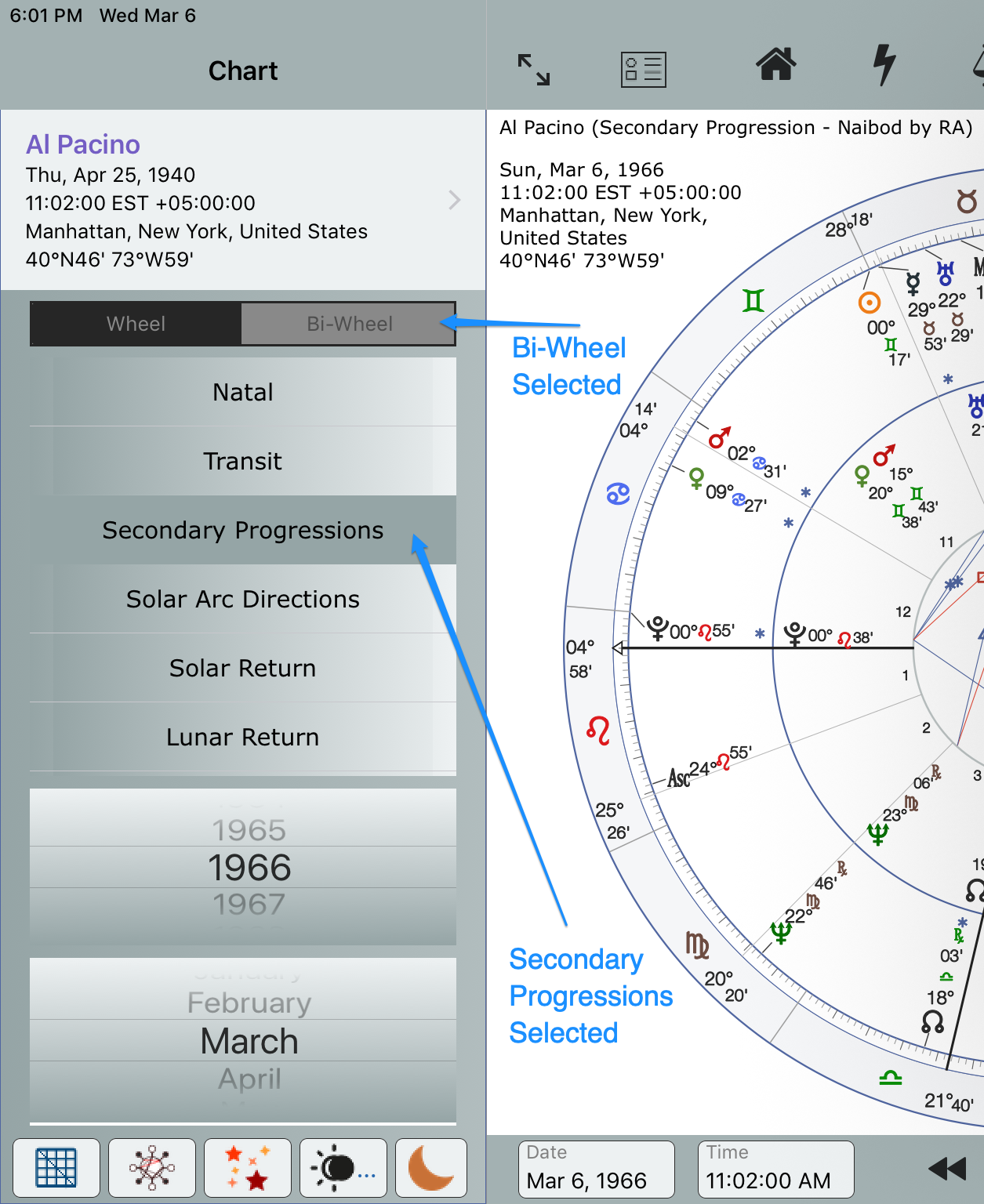 2. Tap the Aspects Icon button for the Aspect Table. After the aspect table is populated note the + marker. This indicates an AC report is available for that particular aspect. 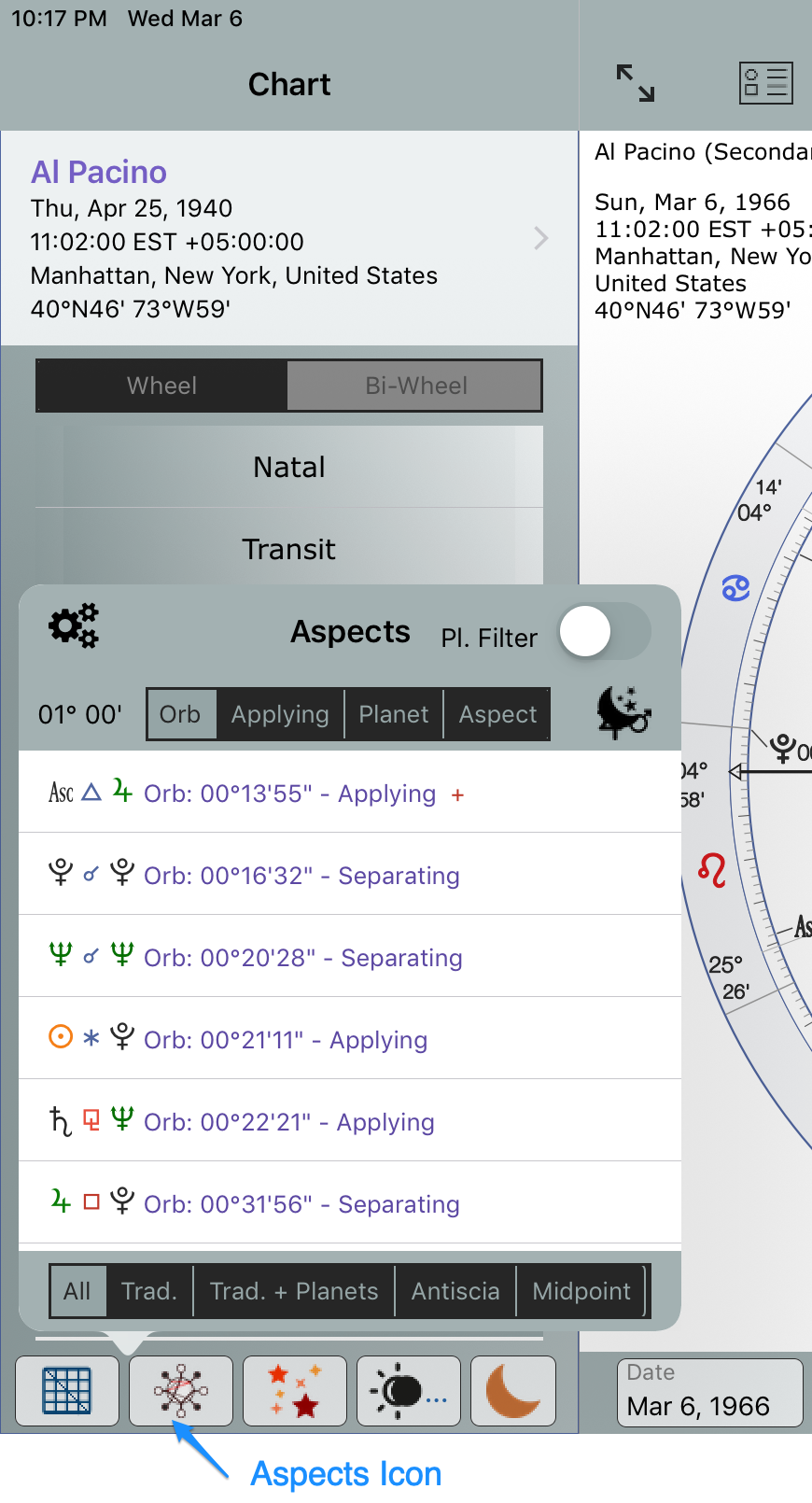 3. Long-press the record with the + marker. This invokes the following view – Report for Aspect.

Report Settings with Strength and Debility 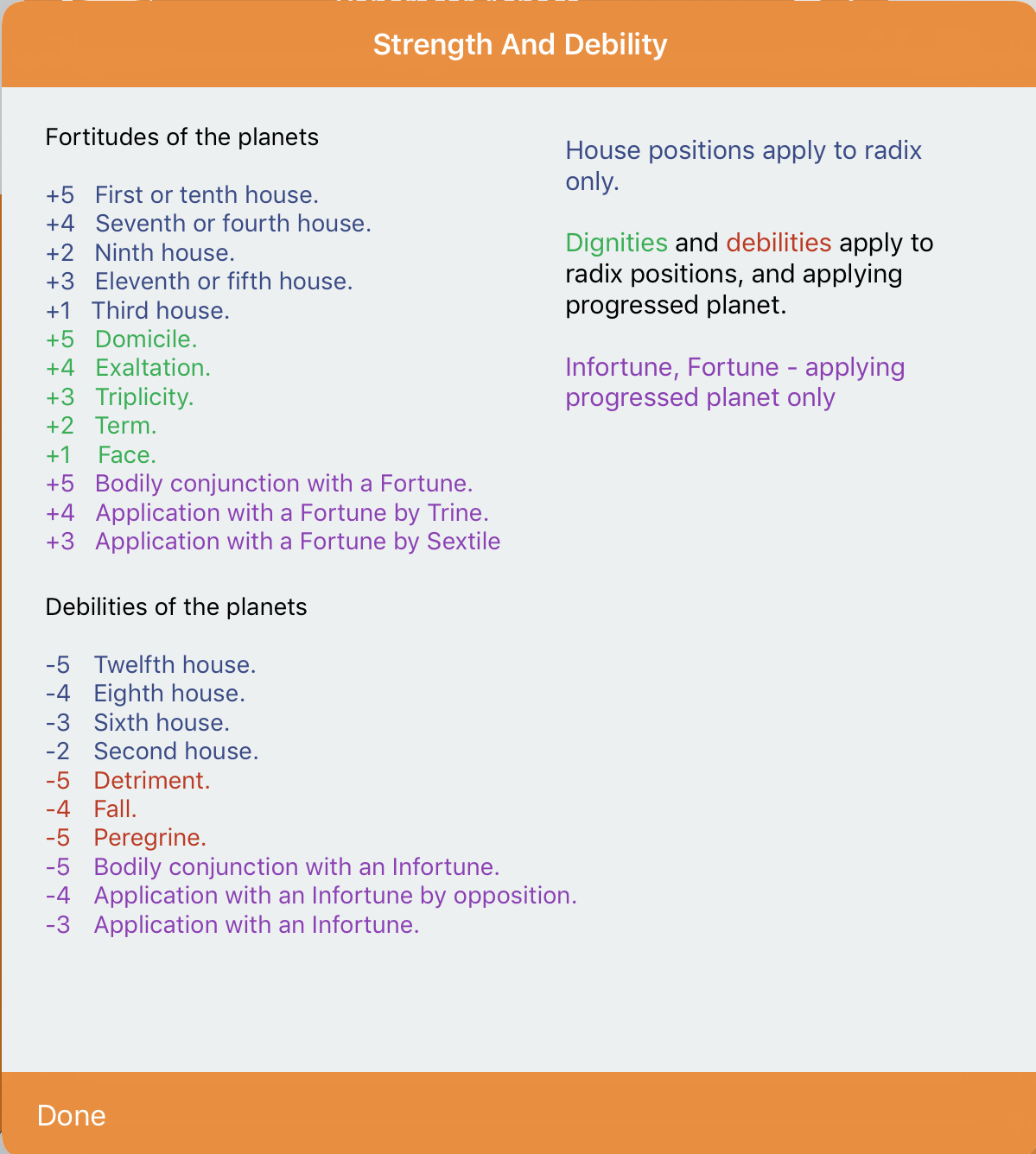 Strength And Debility Analysis by AC

For instance, assume the radix has a Sun/Leo/1st house trine to Jupiter/Sagittarius/5th House aspect and the Sun’s progressed aspect is a square to radical Jupiter. The analysis from Lilly etc, may be far too negative for this progressed aspect if we are aware that the radix positions are so favourable. It is hoped that AC’s algorithm will help in providing a more accurate assessment of the progressed or directed aspect by showing a +ve or -ve graphical score, see screenshot below.

Note that, in this case (Sun/Leo/1st house trine to Jupiter/Sagittarius/5th House aspect), it is useful to see how a Sun trine Jupiter aspect is analysed as this might be more appropriate. To do this inspect the Reports Database. 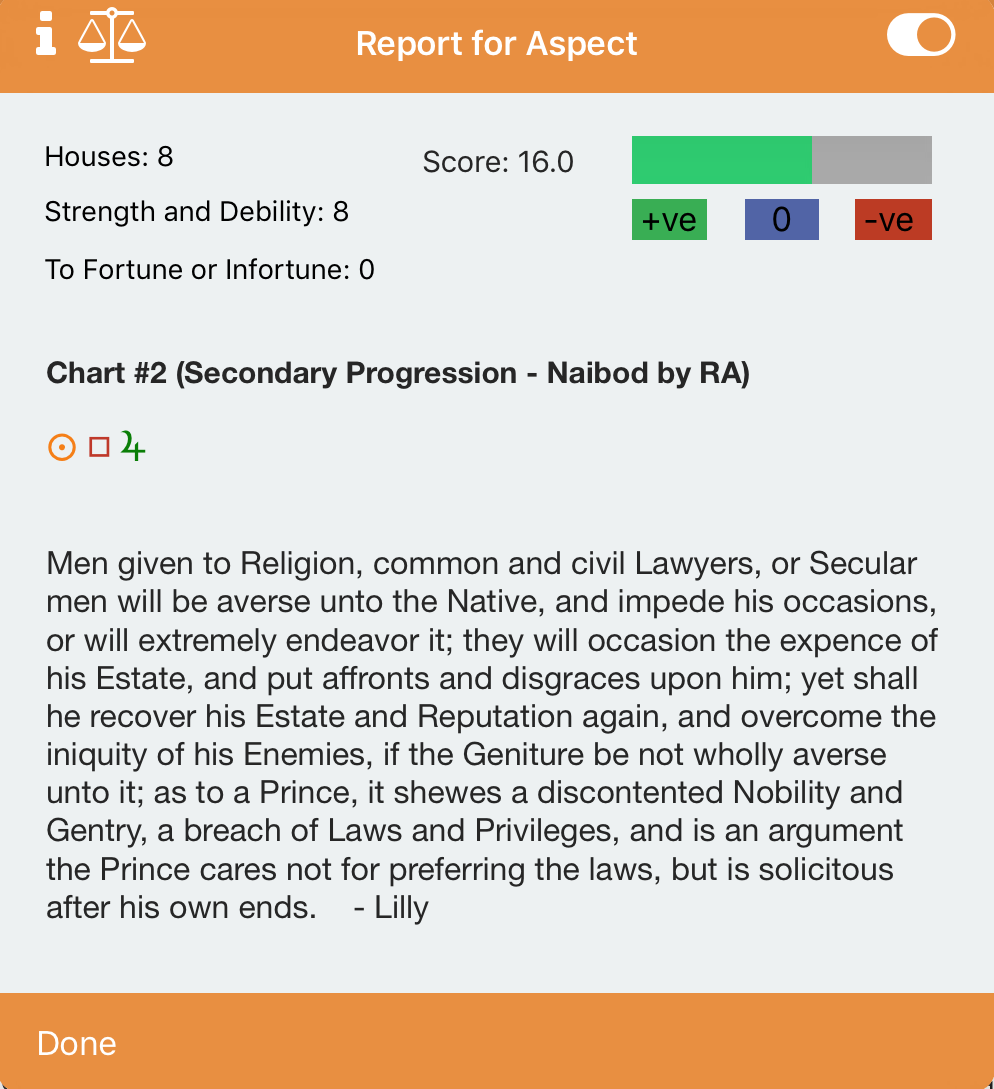 Here’s the rules for calculating the strength and debility of an aspect:

Bodily conjunction with an Infortune, -5 points 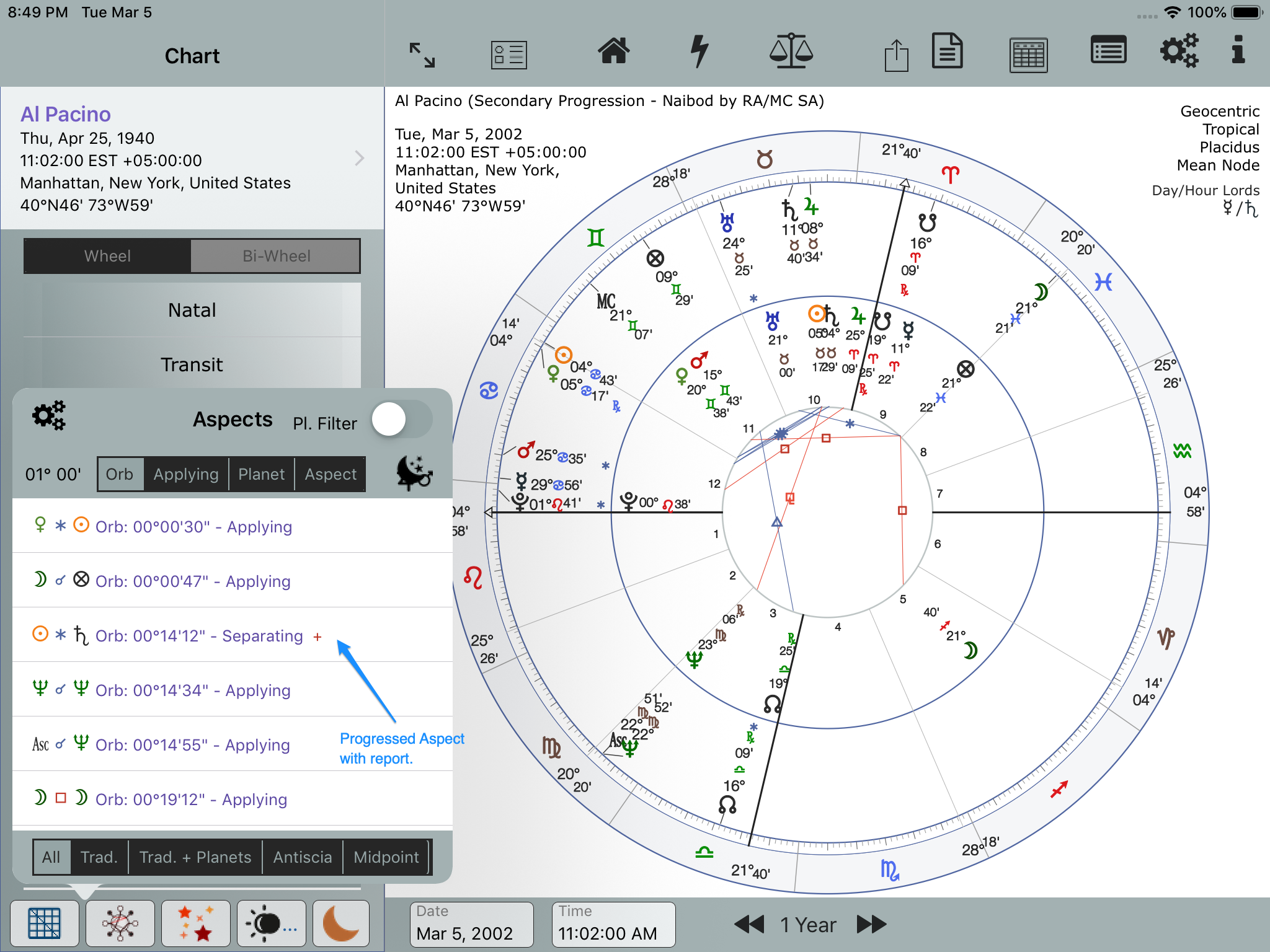 Aspect Table showing aspect that has a report available. A + appended to the aspect record indicates an associated report. 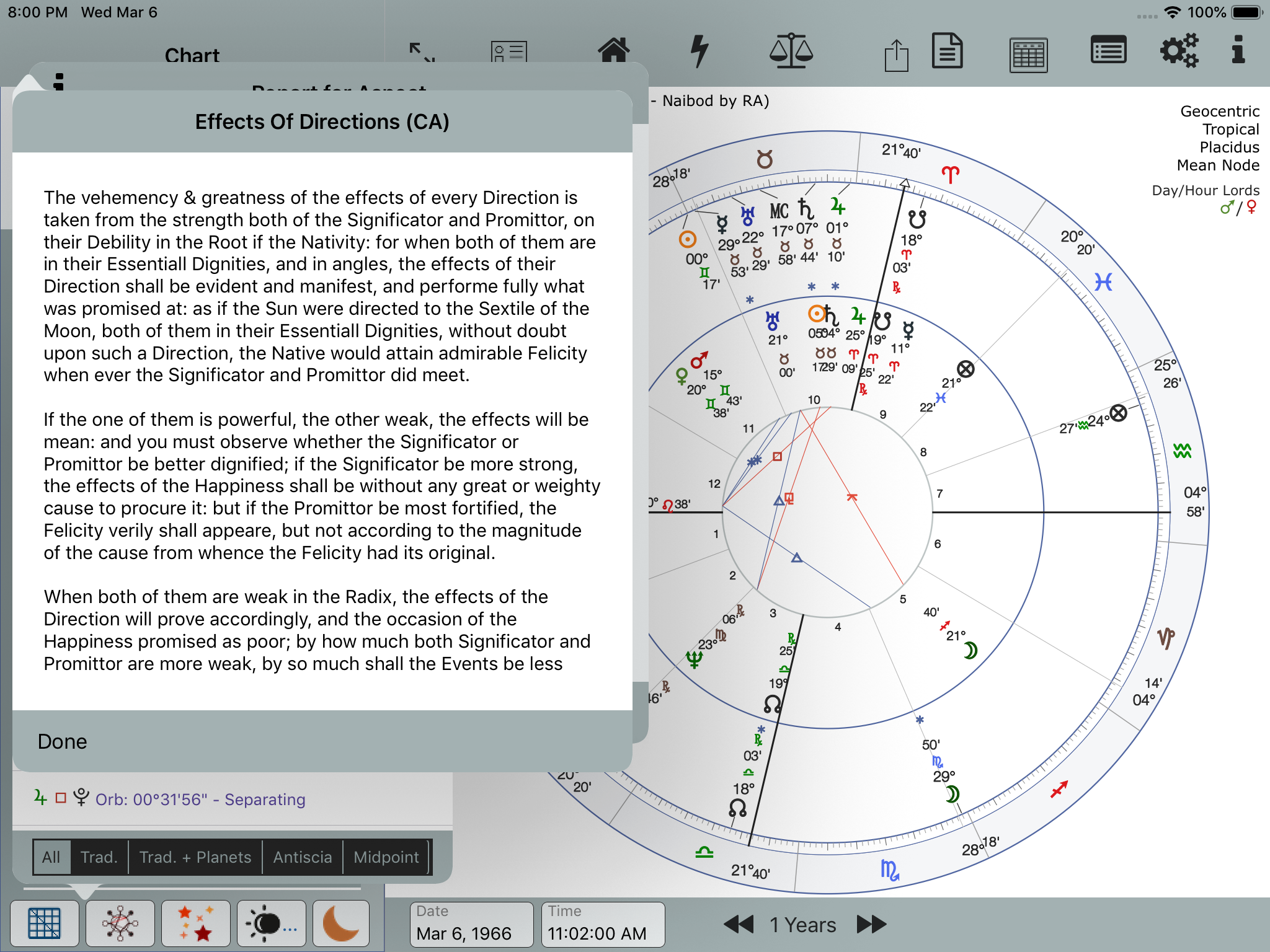 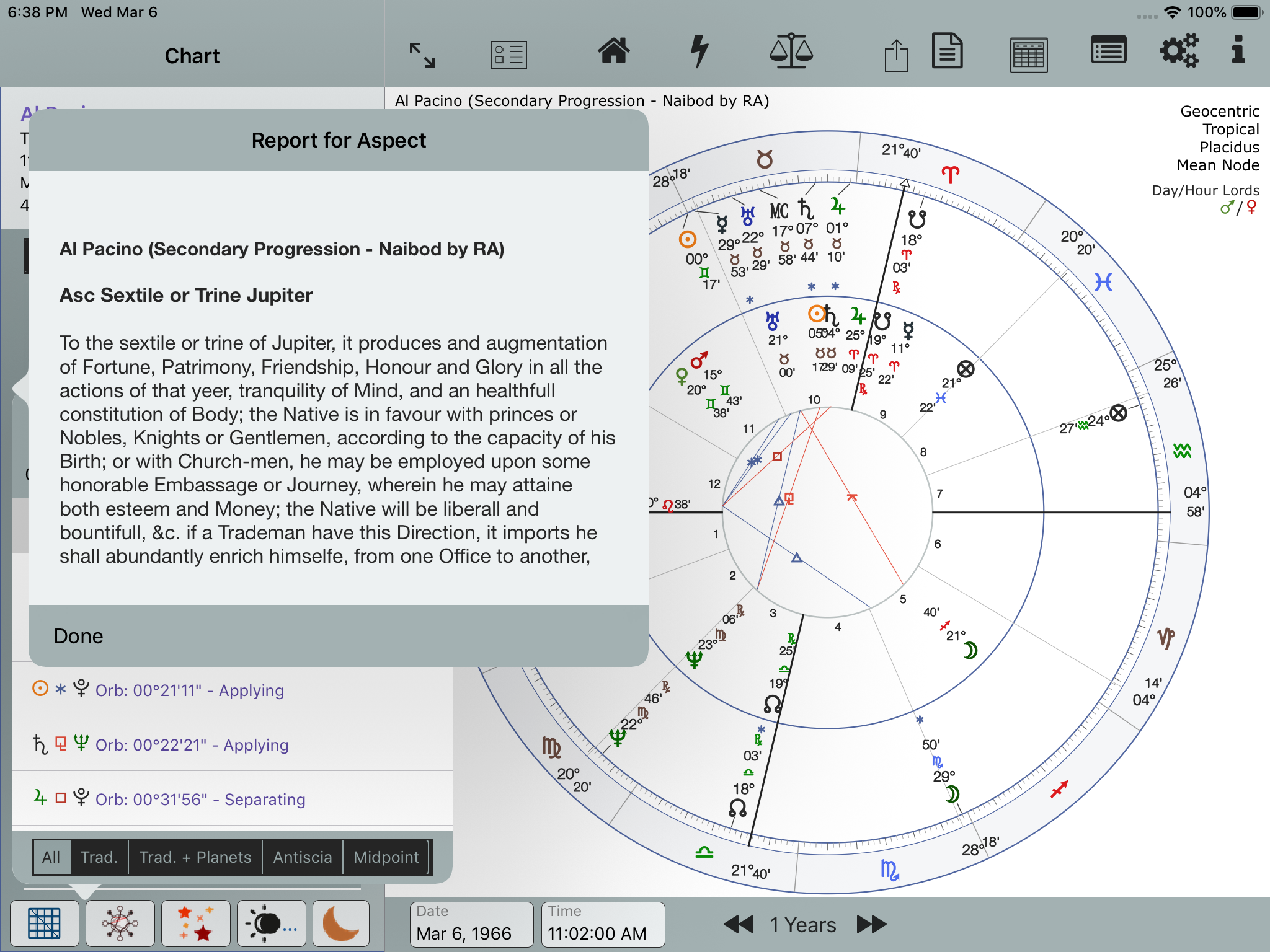 Report with text for Aspect 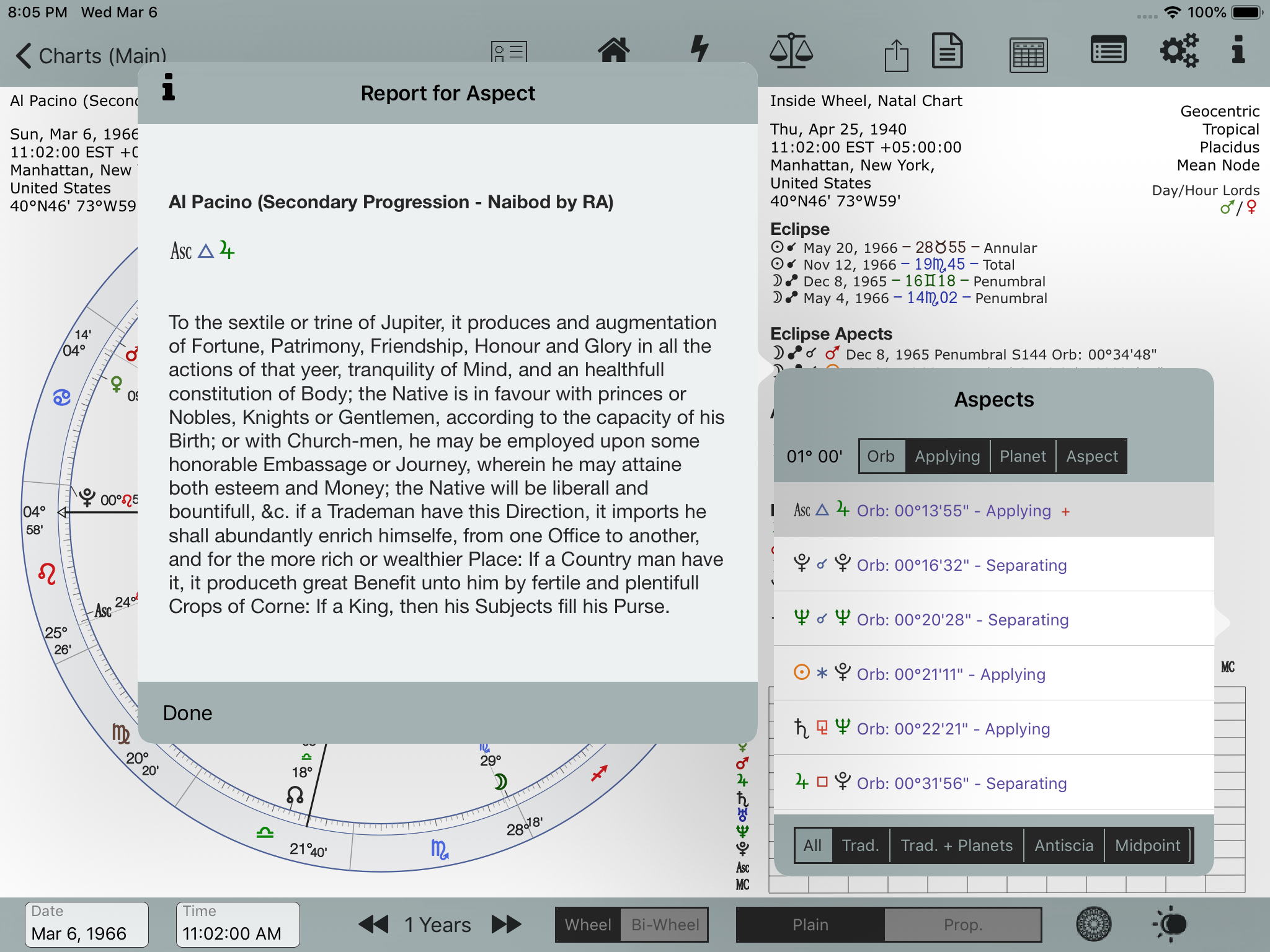 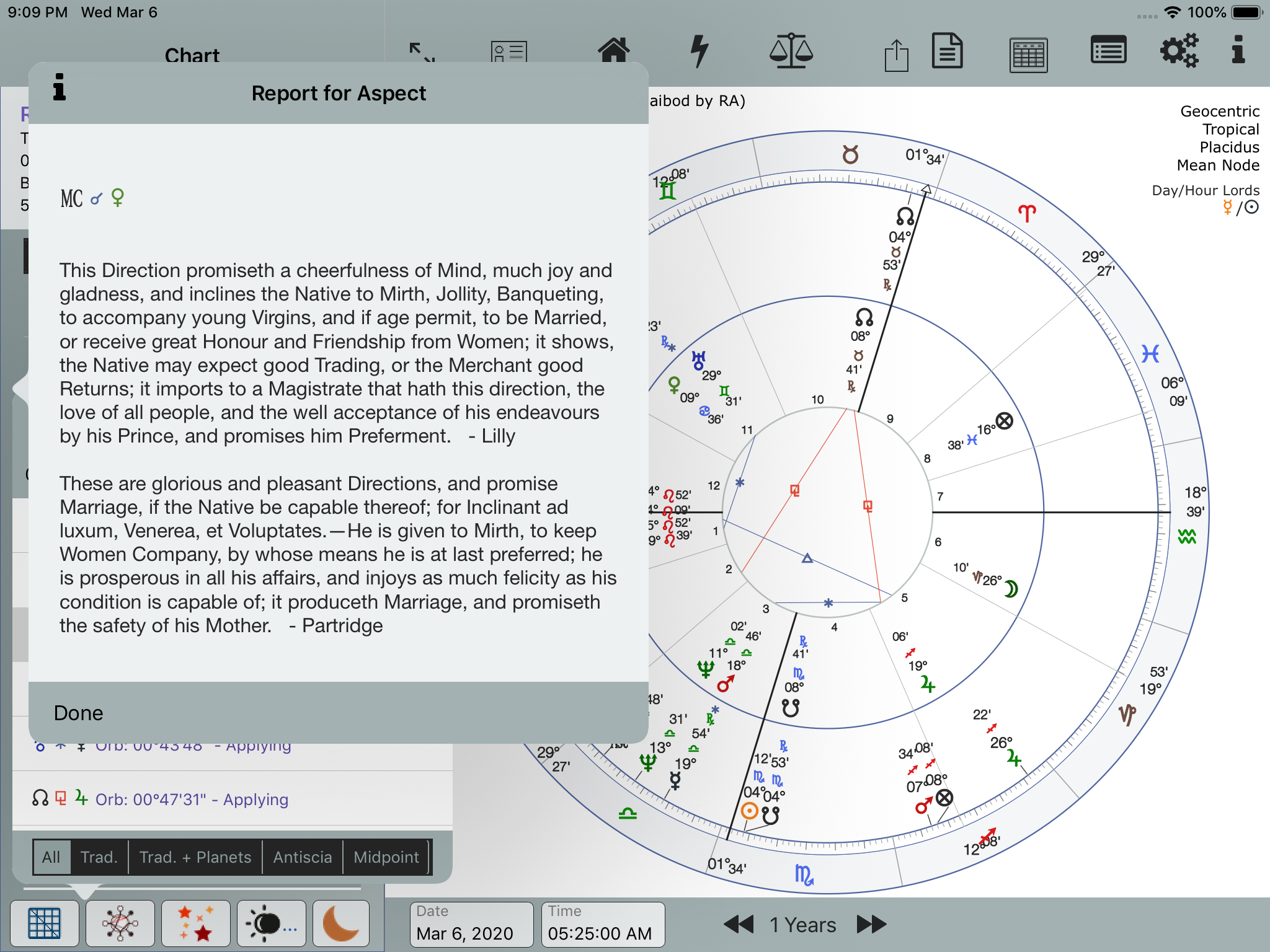 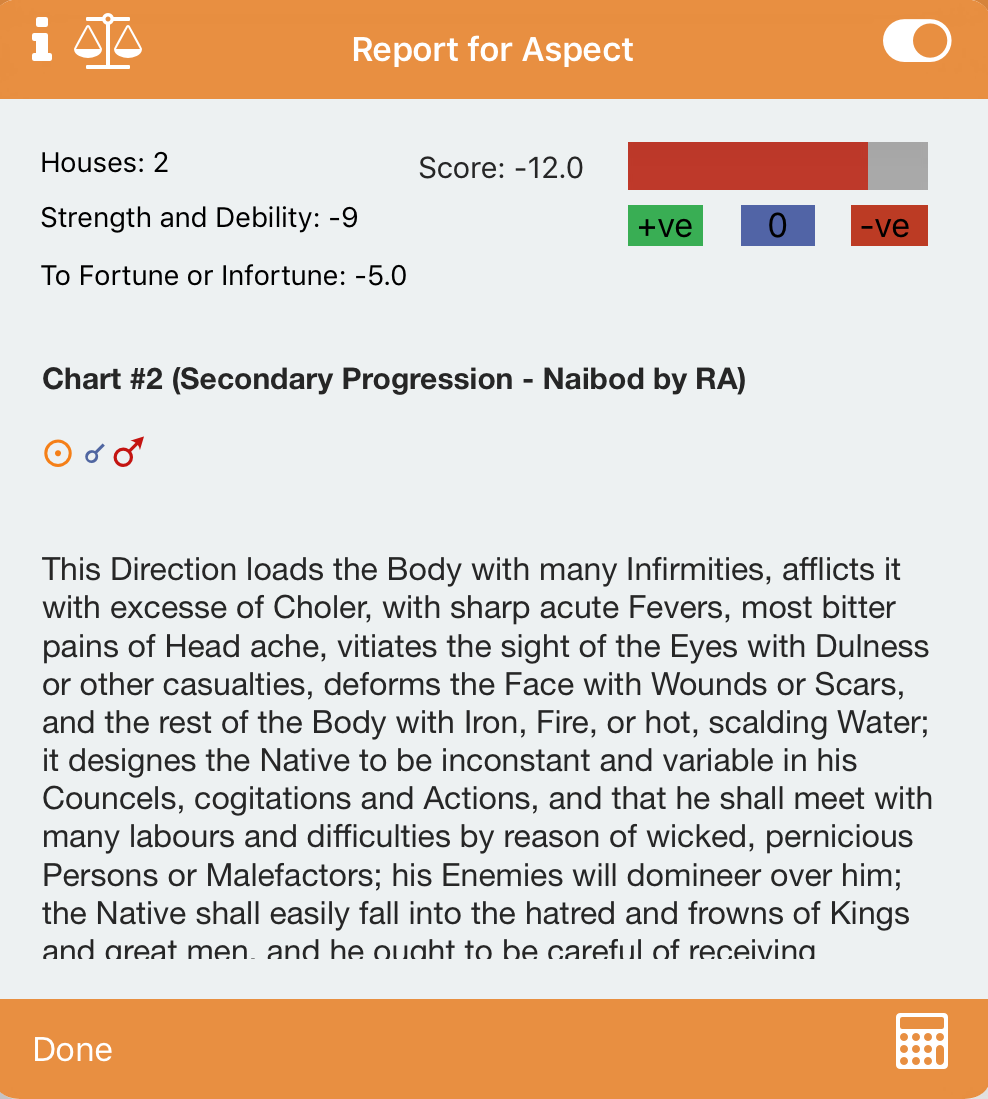 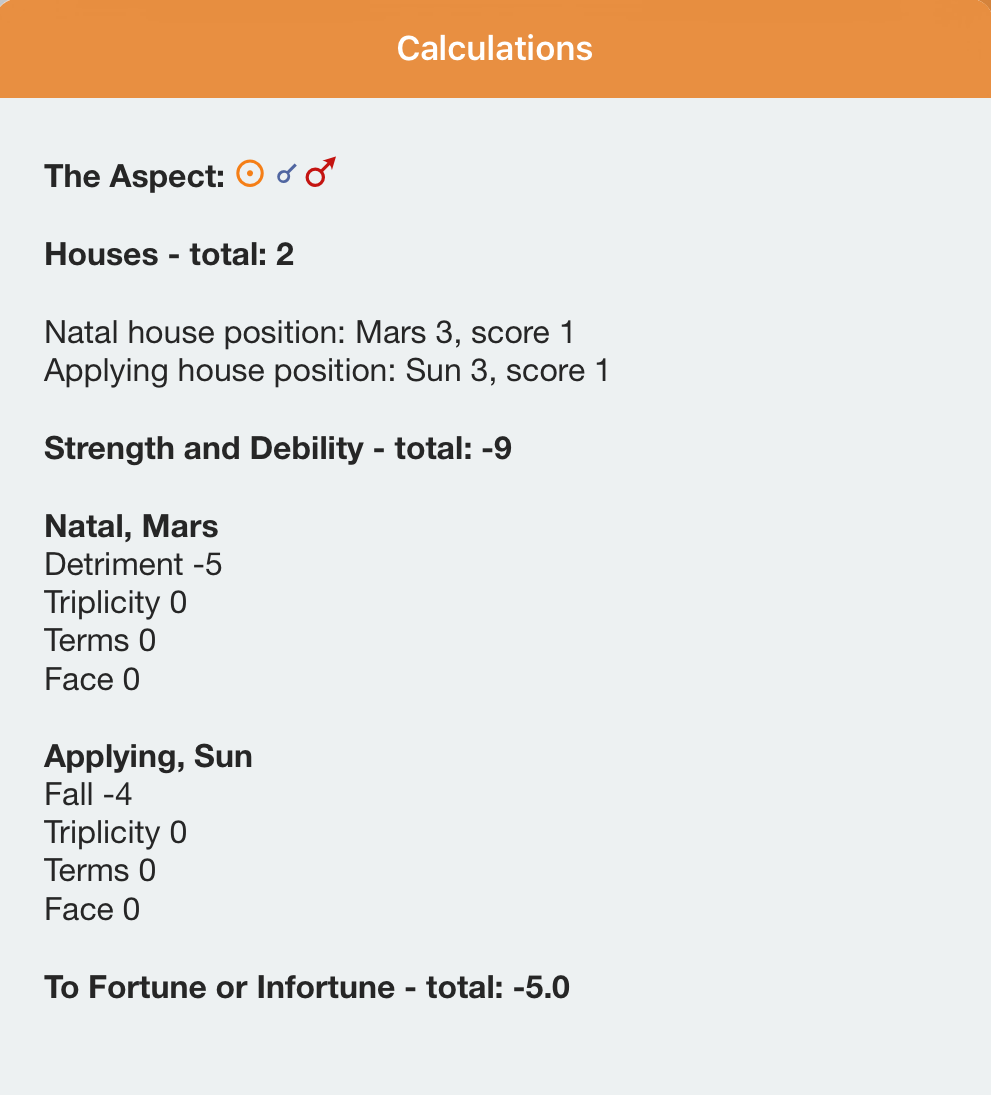 This web page to be completed when AC ver 2.26 is released.

Go to Top
We use cookies to ensure that we give you the best experience on our website. If you continue to use this site we will assume that you are happy with it.OkNo