Aspect considerations for additional points and asteroids in AstroConnexions

Ceres, Pallas, Juno, Vesta – their position in the solar system determines how they are treated with reference to aspects received and given.

They are all located in the asteroid belt, between Mars and Jupiter.

How does AstroConnexions handle aspects to and from these asteroids

From Ceres > Mars ie all aspects from Ceres to Jupiter, Saturn etc

To Ceres <= Mars ie all aspects to Ceres from Moon, Sun, Mars, etc

So, Ceres and the other asteroids aspect Jupiter, Saturn, Uranus, Neptune, Pluto and other points such as the Asc, MC, East Point. They would be shown aspecting the planets indicated. Planets such as Sun, Moon, Mercury are shown aspecting the asteroids. The exception is when they are involved in a secondary or solar arc direction.

These are taken as a point much like the Asc or MC -all planets aspect them. Again the exception is if the are involved in a secondary or solar arc direction.

Aspects between Arabian points are not shown or calculated, eg between POF and part of nemesis

Support. Got a problem with AC?

I've progressed a chart (or similar). I want to create a snapshot of this chart. How?

I've progressed a chart (or similar). I want to create a snapshot of this chart so I can easily return to it later. How? Sorry. This is currently not possible. But it is on my to do list. 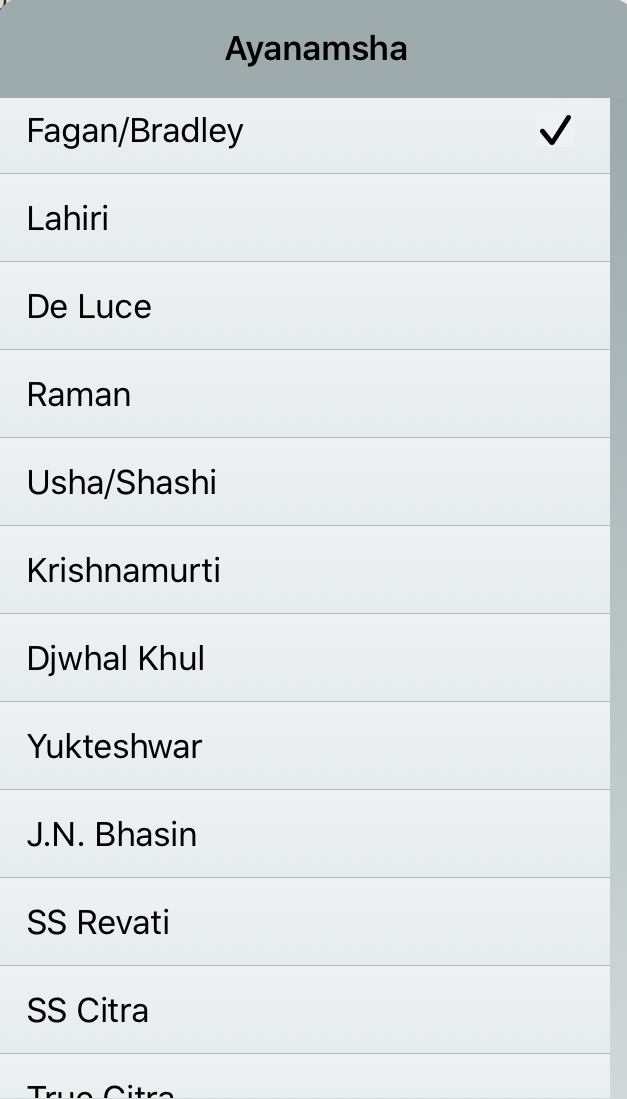 Is Dark Mode Supported by AC? Yes, but...

Why is the Full Landscape Setting Disabled 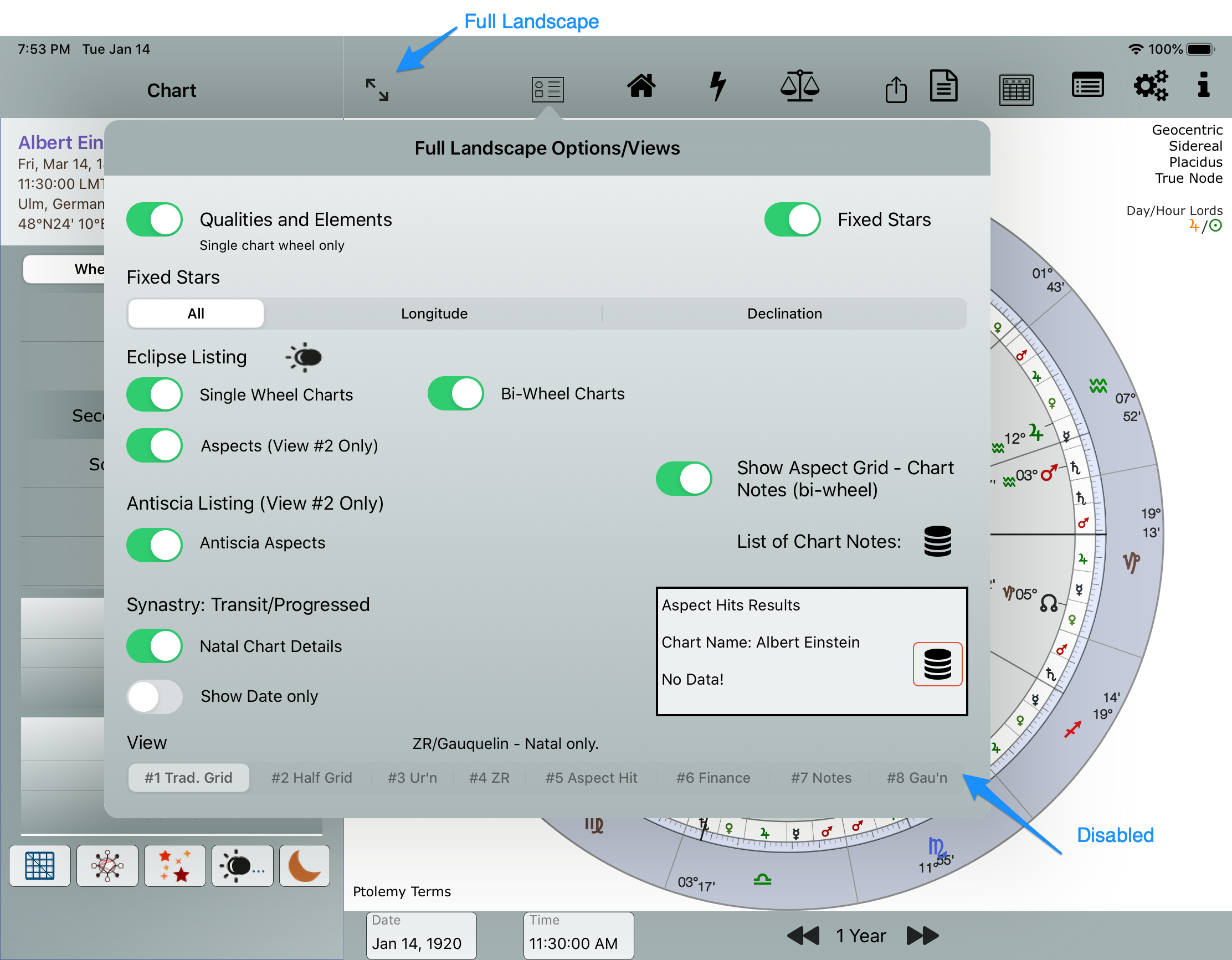 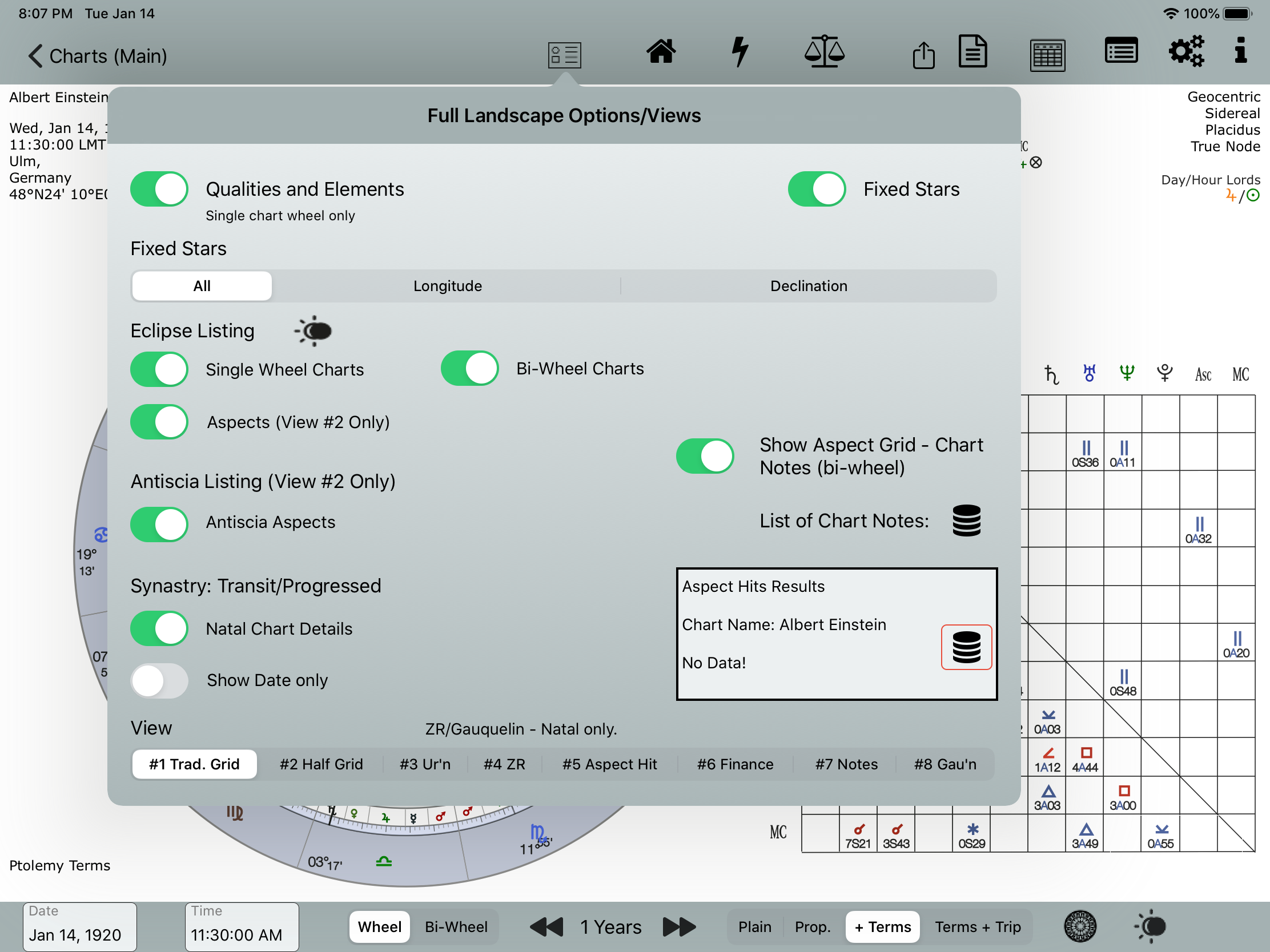 What type of charts are available? 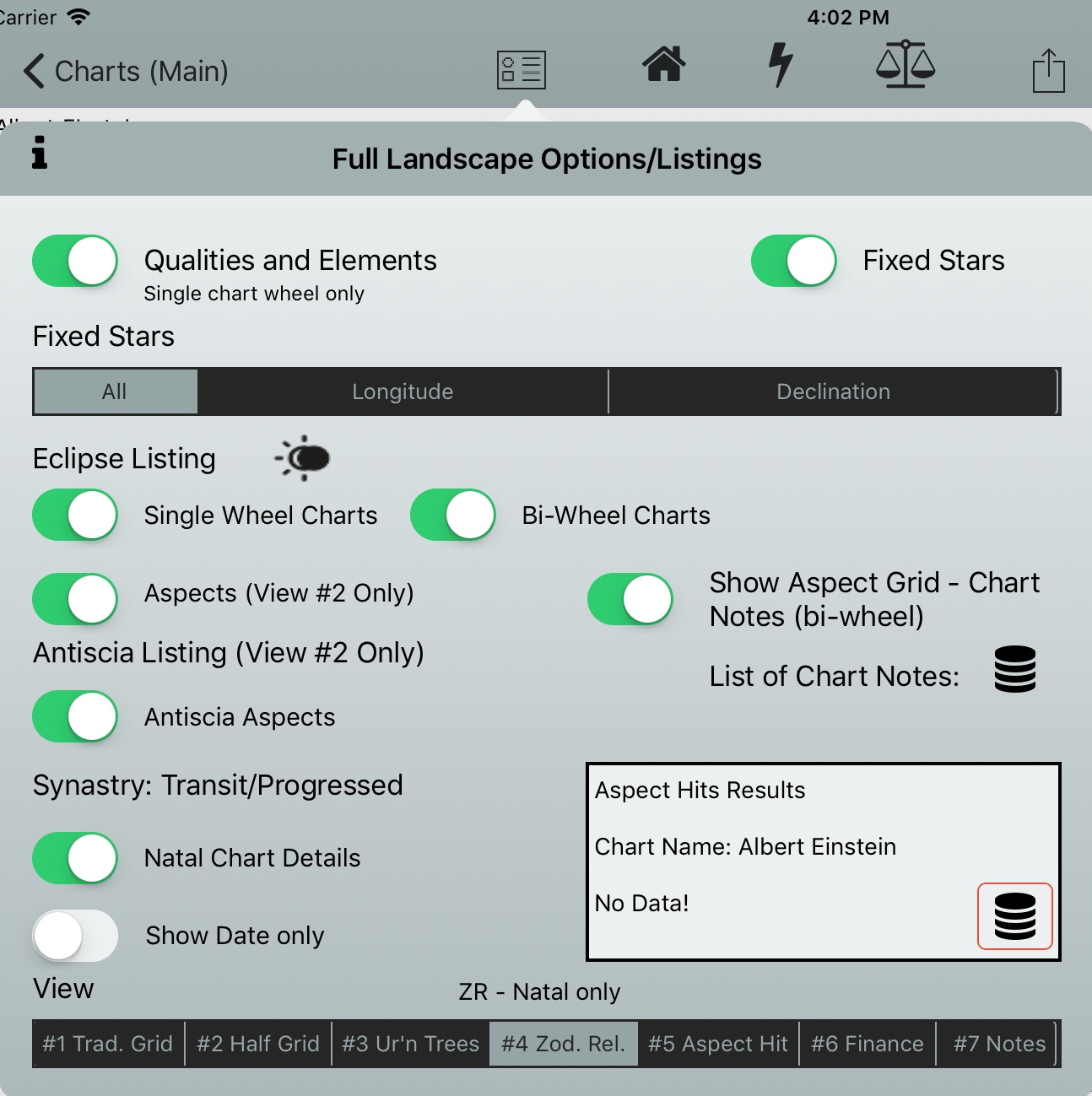 I don't see certain fixed stars in my charts. How do I fix this?

How many Fixed Stars are available?

274Knowledge Base: Fixed Stars Many are set up to be use immediately by default but you might want to add or remove others? See Add/remove a Fixed Star

What House Systems are available?

Note that temporary house systems can be deployed. See the main menu (tap the house icon):

How do I set a default House System 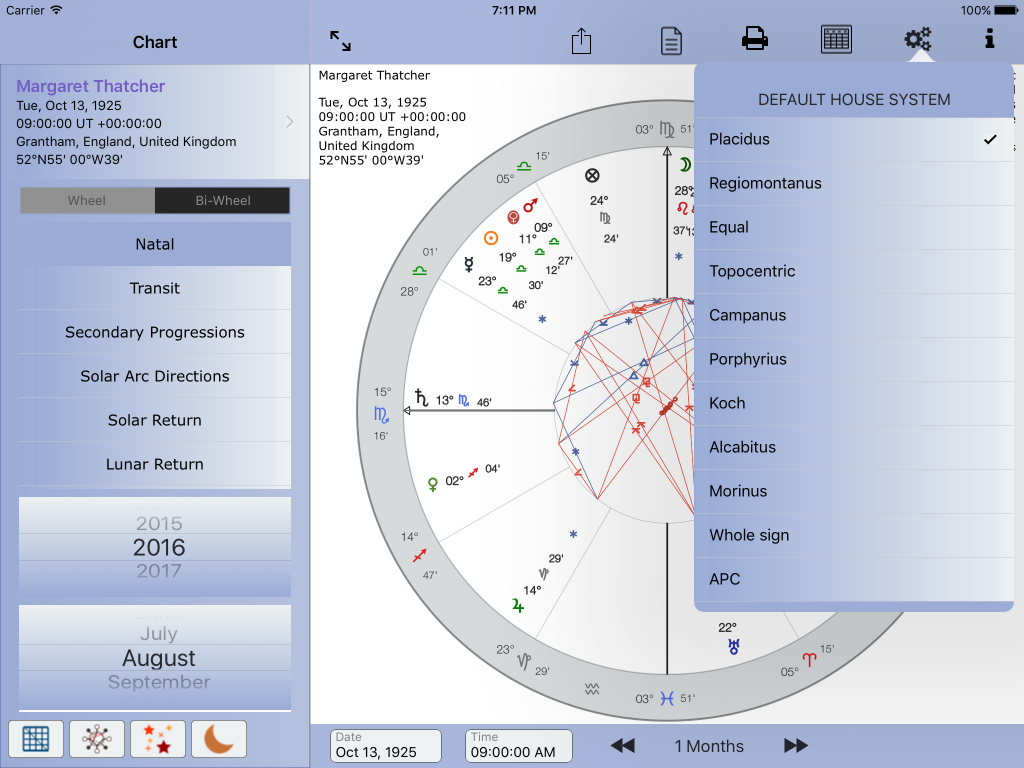 Where's the setting for Bi-Wheel orbs (inc Transit and Returns)? 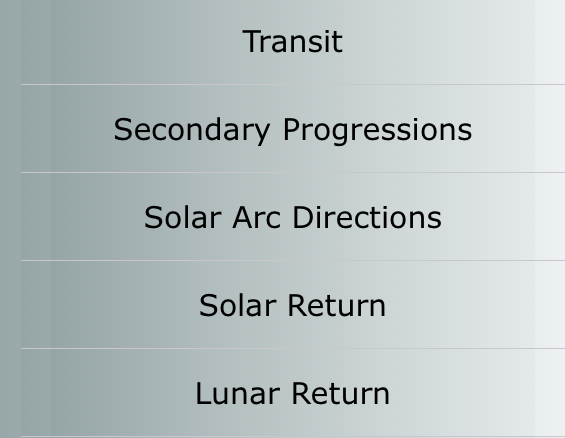 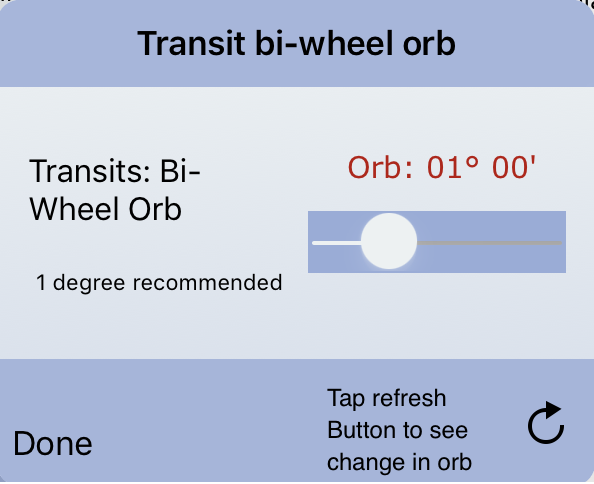 I'm new to all this. How do I create a new natal chart?

Check this out - a short video and a post

I've found a bug. What should I do?

If I report a bug how long will it take before it's fixed?

It depends. If the bug report comes with screenshots and a way to replicate the bug, I will fix asap, probably the same day. Note that once I deploy it to Apple they take about 6-12 hours (or less) to release it to the app store after they review AC. They are a lot quicker these days.

What are the red/black stars on the chart?

Fixed stars in conjunction, by long or parallel, to planets or points. To view the Fixed Star aspects for the currently displayed chart: 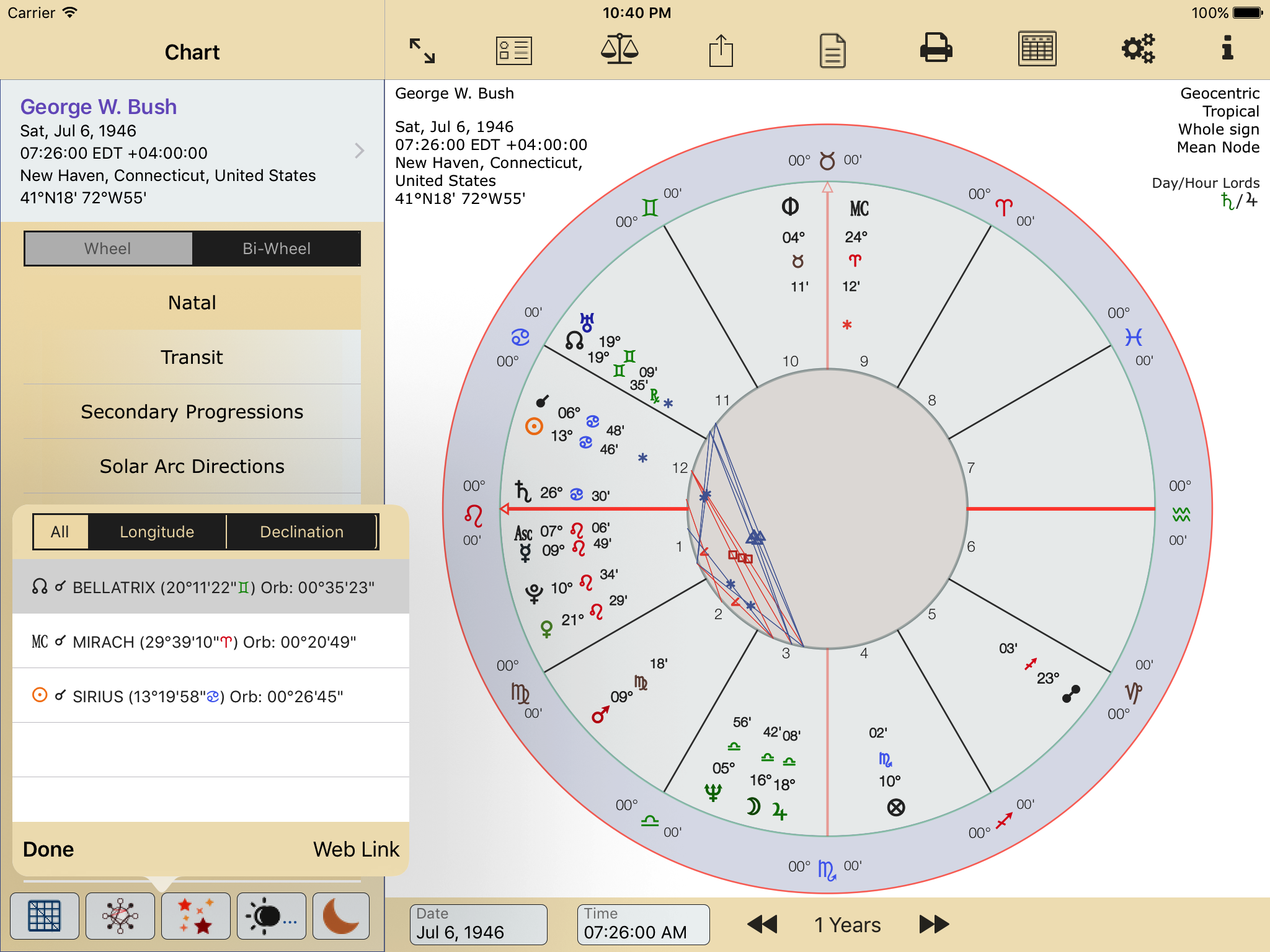 I want to 'progress' a horary chart (for a day or hour) in real-time. How?

Given that a natal or horary chart is fixed, how is this possible?Easy. Just tap the advance in time button once and the chart will change to a transit chart with the same date/time/place of the horary chart. Now you can advance/progress the chart in real-time.

There's a feature I'd like to see implemented. What do I do?

Ask me.support@astroconnexions.com or email supportIt may not happen for a few weeks or months, but if it's something that other people would find useful I'm sure it would get implemented.

For all types of charts.Please note Synastry comparison charts are bi-wheels by default as are Antiscia charts. Gauquelin charts are by default natal. Bi-wheel is therefore not applicable.

Can chart bi-wheels be animated?

Yes, if you mean can the outer wheel be moved (while the inner chart remains stationary) by whatever time scale is chosen.For example, if a secondary progressed (Naibod by long) chart is selected as a bi-wheel, the outer chart is progressed using that time scale, as would be expected.Apart from Returns and Synastry comparison charts. These cannot be animated in that way. However, Return charts can be saved (as radix charts) which allows them to be animated. Saving a Return chart

Aspects for midpoints are calculated for all charts. 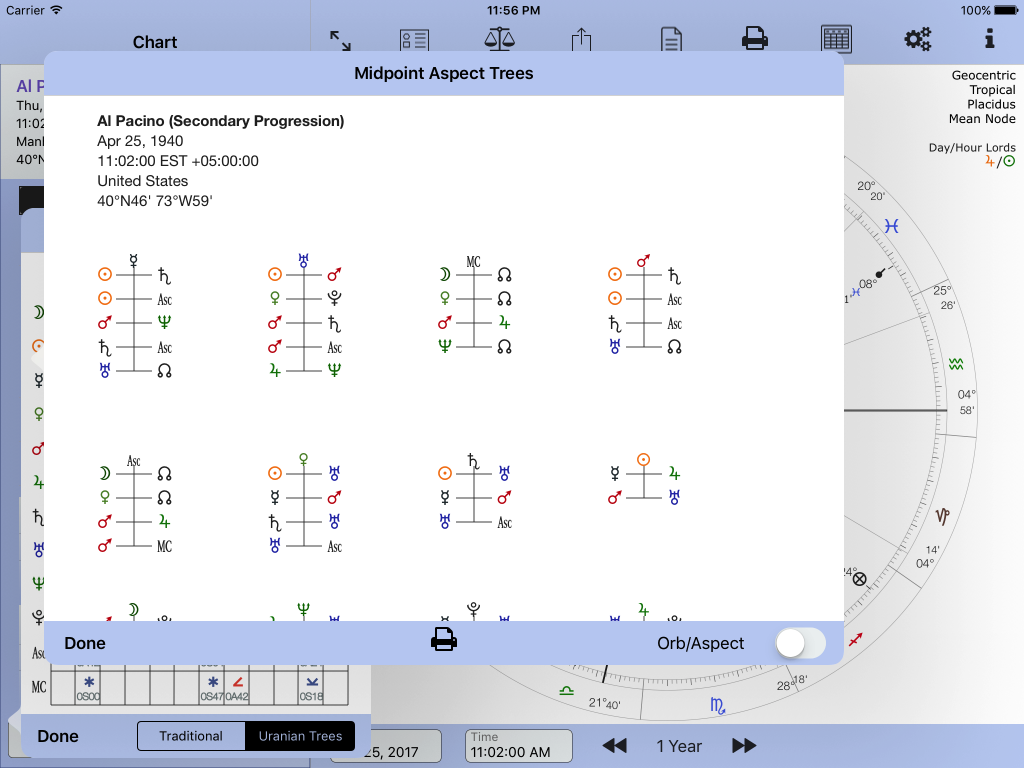 Aspects to Midpoint Trees No Orb or Aspect Shown 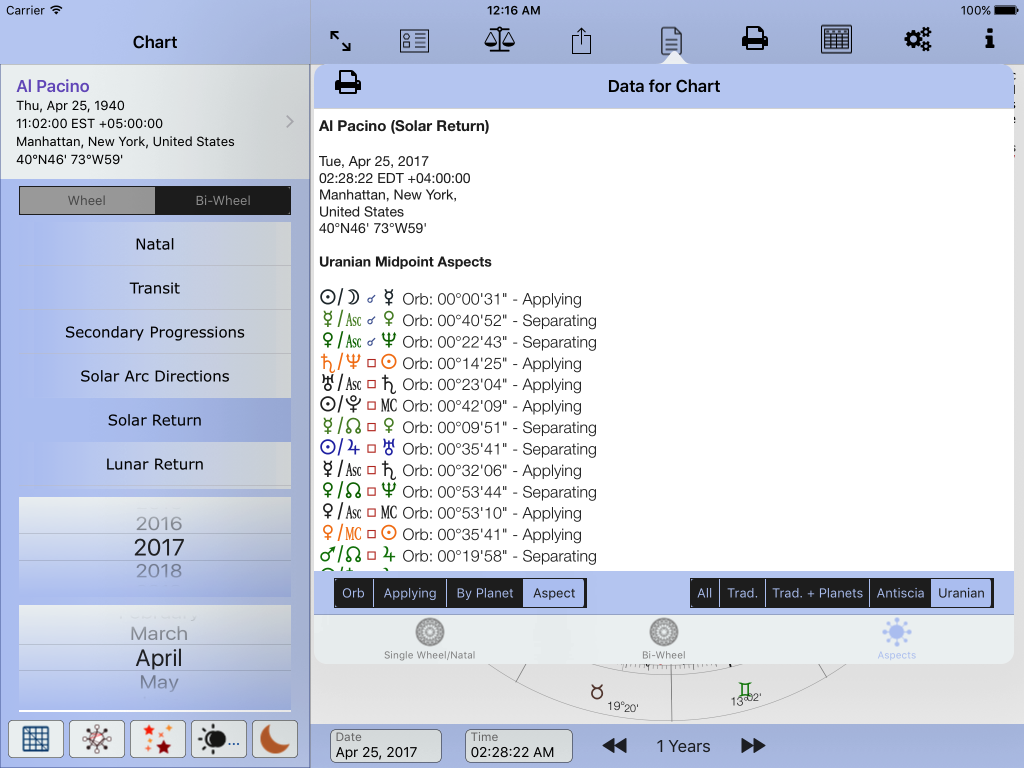 Yes, if you mean can the outer wheel be moved (while the inner chart remains stationary). Animated Charts

How can I view the chart notes?

Tap bottom right.Knowledge Base: Chart Notes There is also an extended Chart/Finance Notes: Chart Notes Your pop-up notes can also be viewed in Your Charts table. See: 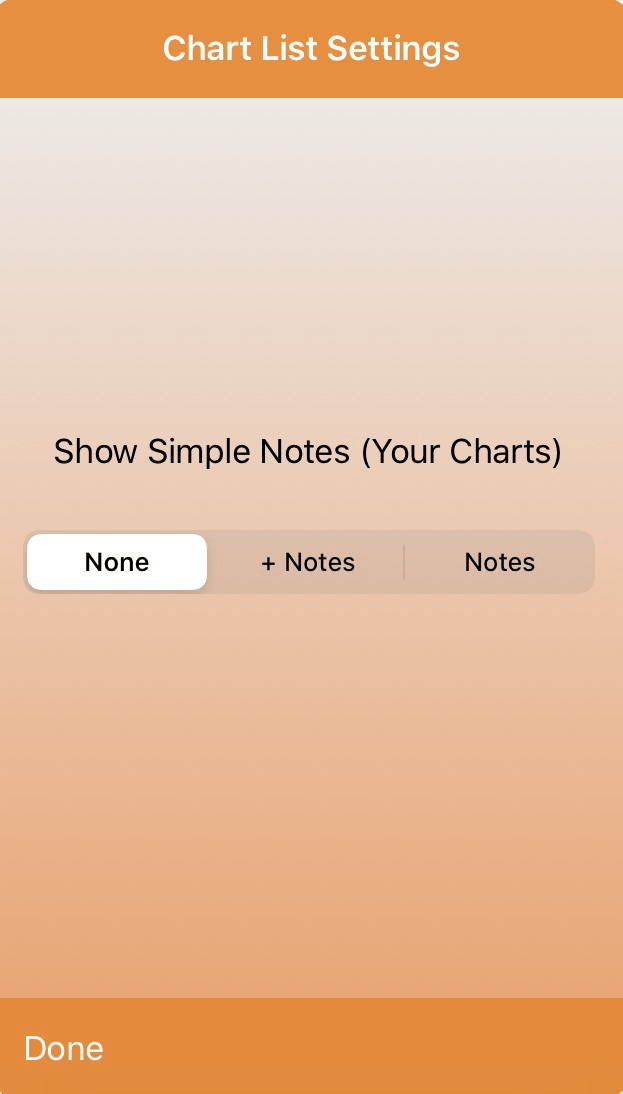 How many long-press views are there? (Answer: 10)

6. Long-press Natal button This brings up the Edit Chart view 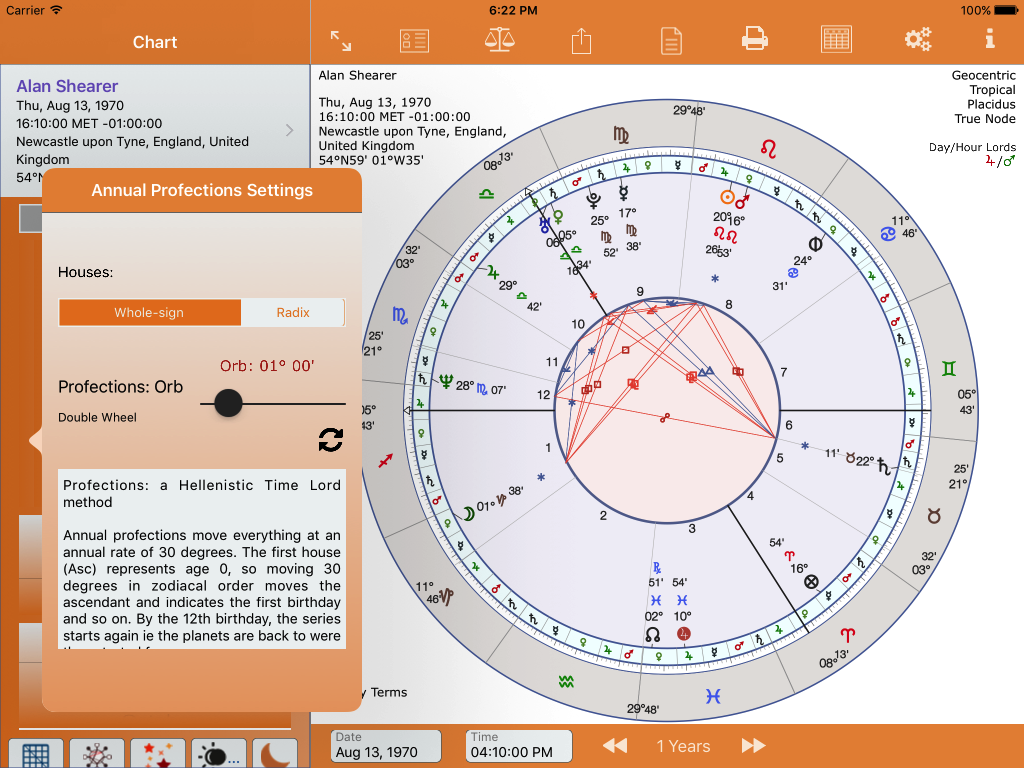 Can I choose which aspect lines are shown?

I'm not interested in Declination. How do I stop them showing up in the aspect table?

Un-select the declination aspects from the Displayed Aspects/Lines table. 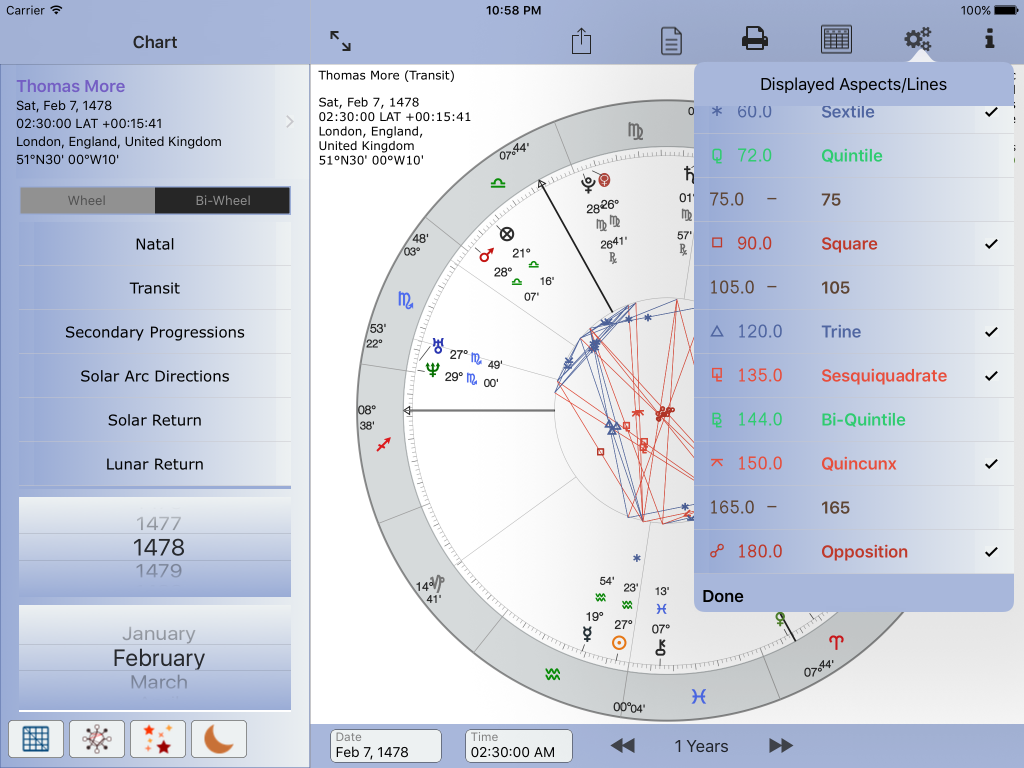 What time should I enter for the Time Of Birth?

Clock time. Your local time. The time on your wristwatch or smart mobile phone. If a birth occurred in the evening, say 8 pm local time, then the time entered should be 8 pm. AstroConnexions takes care of the time zone and/or Summer time or Daylight saving time.

How do I access the Aspect Hits and Time Map?

Tap the Lightning Bolt icon, when a natal/radix chart is being viewed top menu. The Time Map can be invoked from the Aspect Hit View.Knowledge Base - Aspect HitsNote that Aspect Hits for Secondary Progressions "Mean Quotidian" is not currently available.

How do I save a Return chart

Tap the Lightning Bolt icon, top menu, when a Solar or Lunar Return is displayed. Saving a SR chart

The aspect grid doesn't show my transiting (etc) aspects. Why?

The most likely reason is that the orb setting is too small. By default AC's orb setting for a transit bi-wheel is one degree. Similarly, this orb size is used for many bi-wheels. To change the Transit or Returns bi-wheel Orb go to Chart Calculations/Miscellaneous and change there. 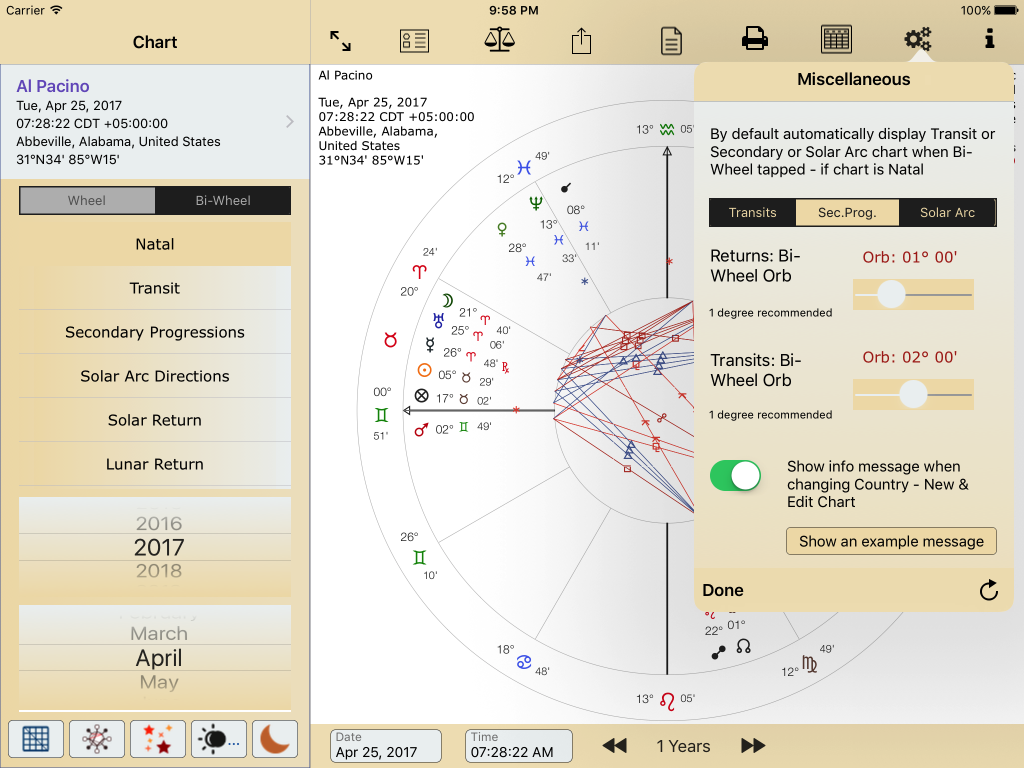 What type of aspect tables are available?

Here are some example screenshots 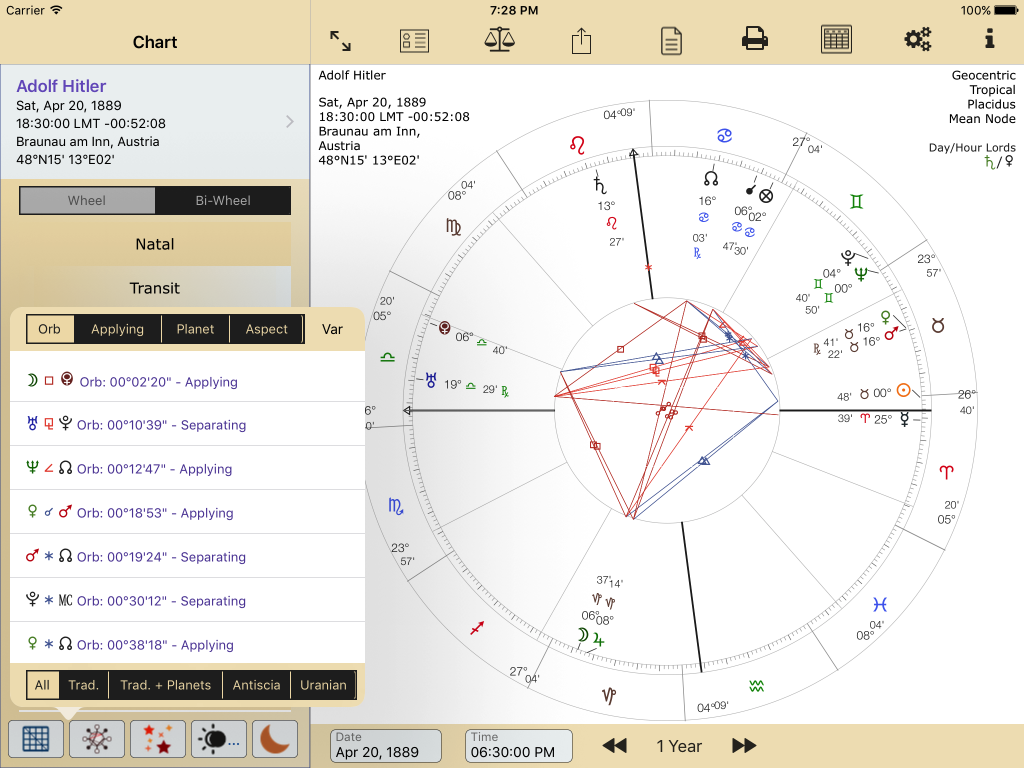 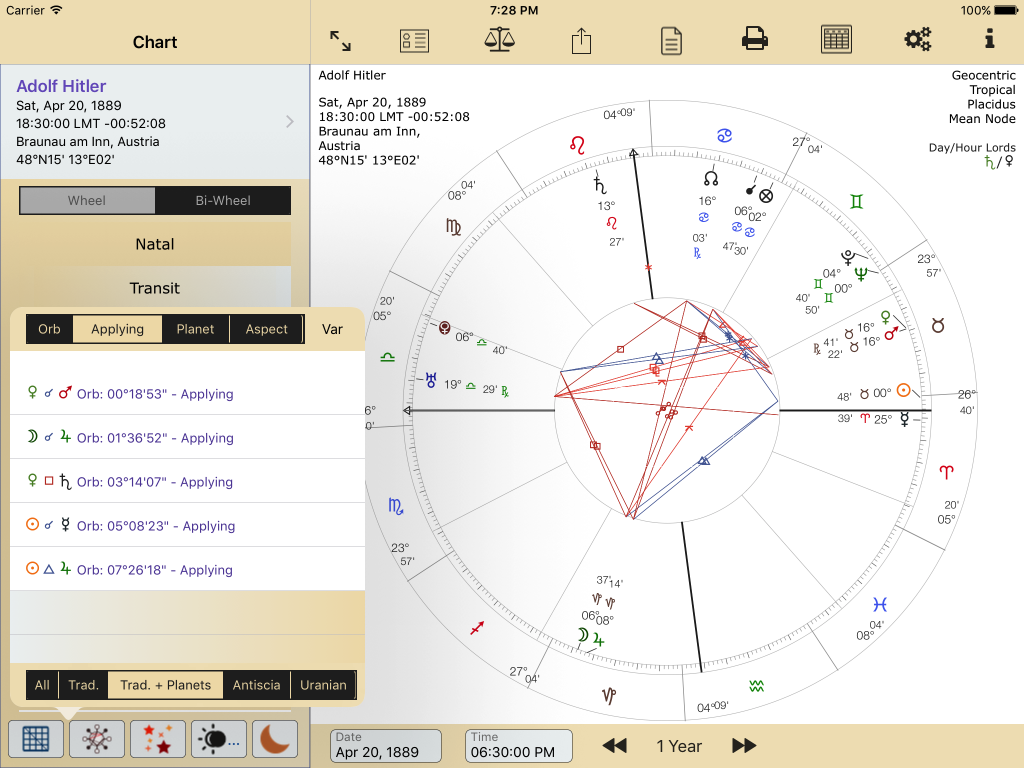 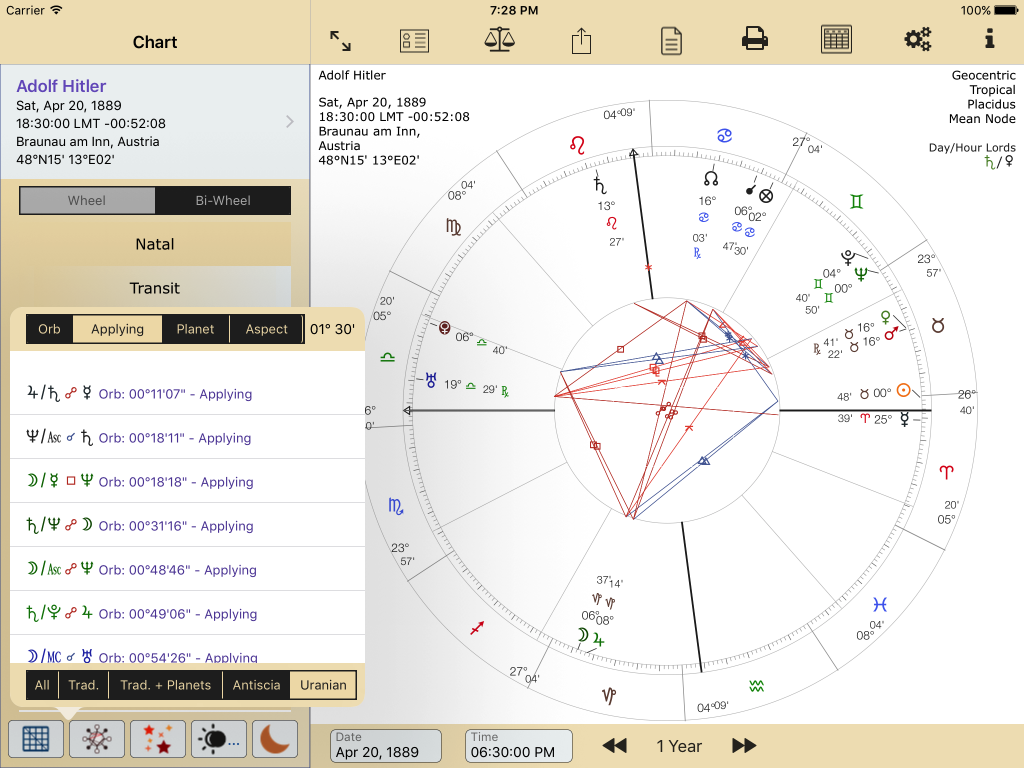 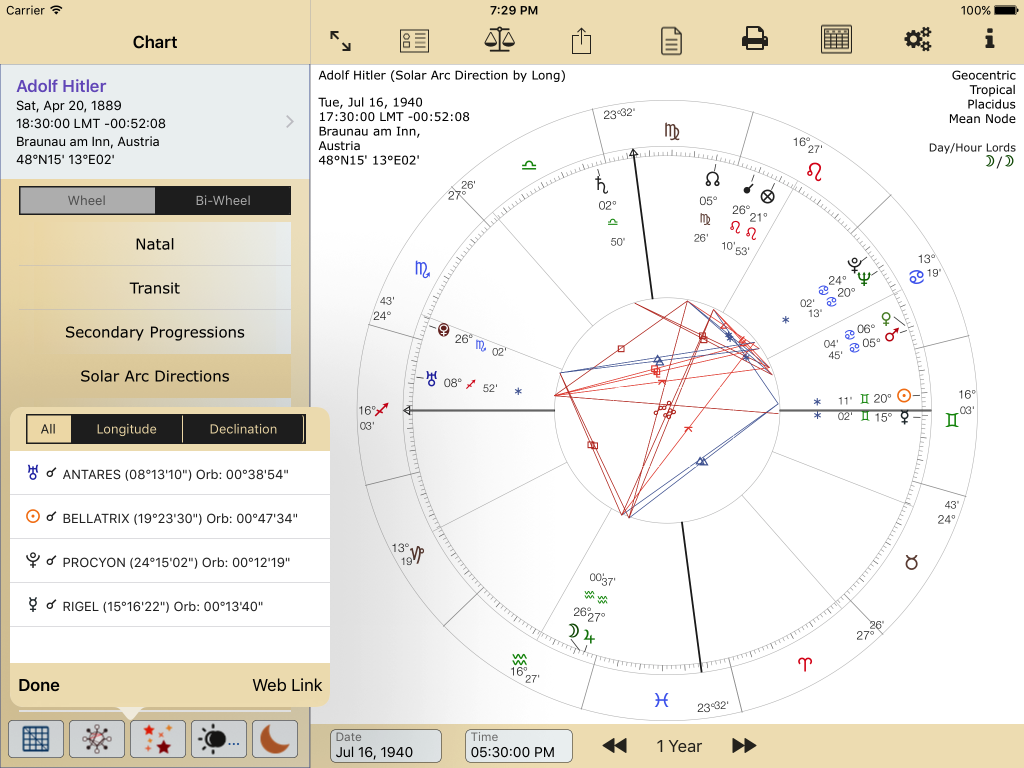 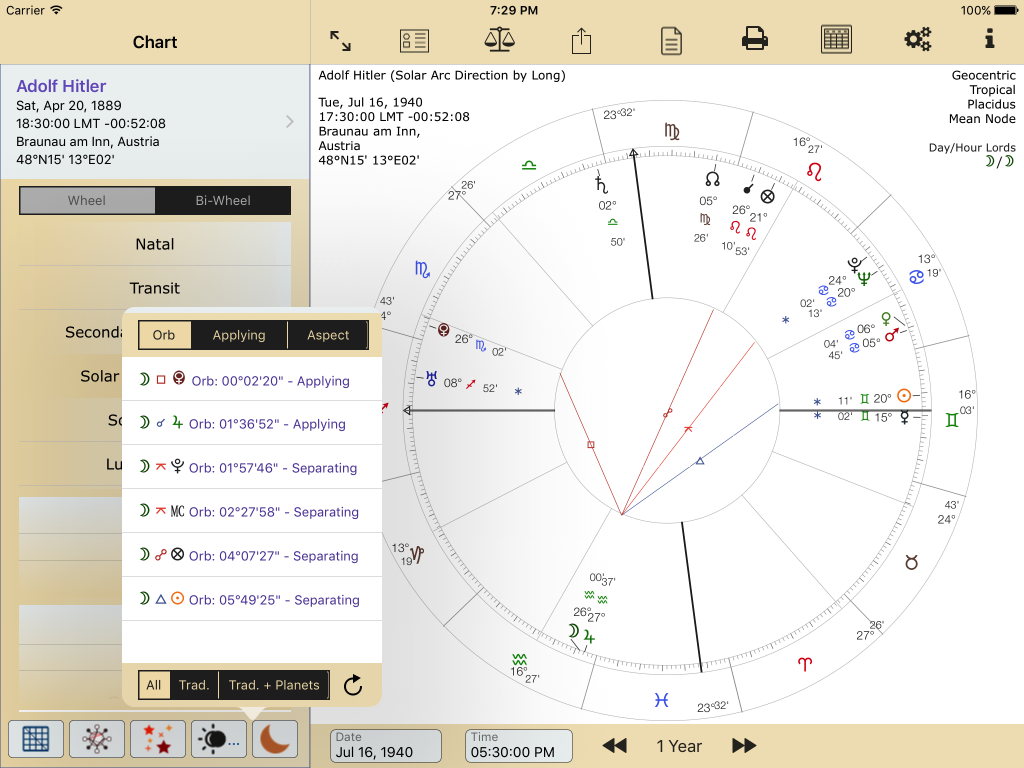 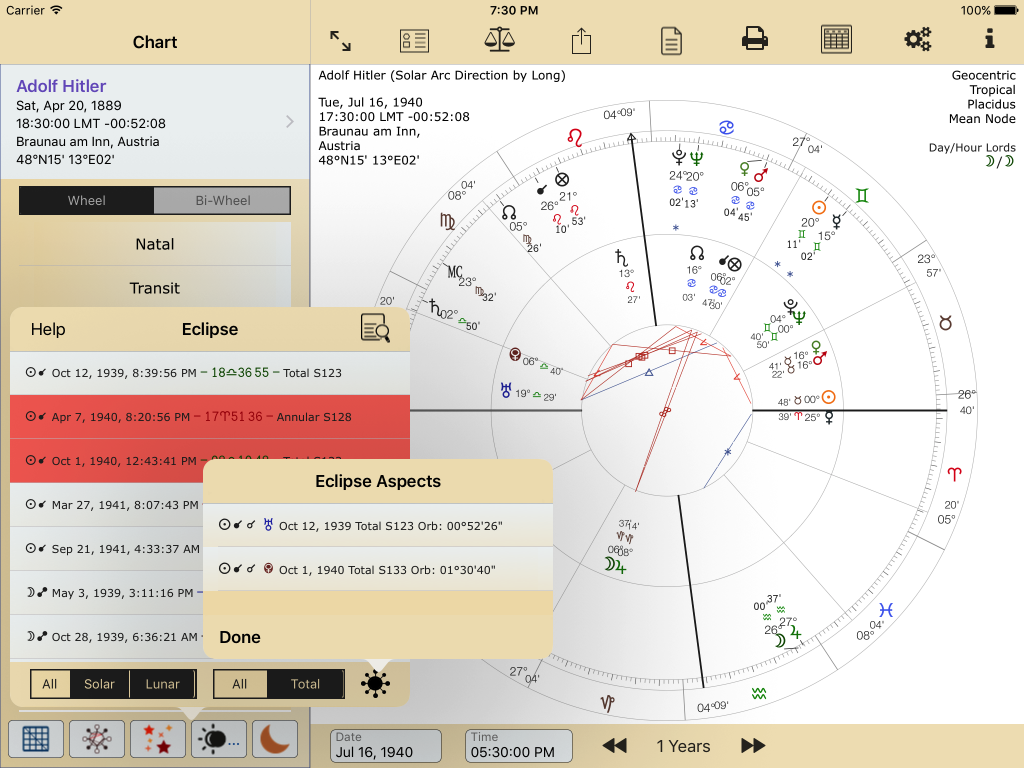 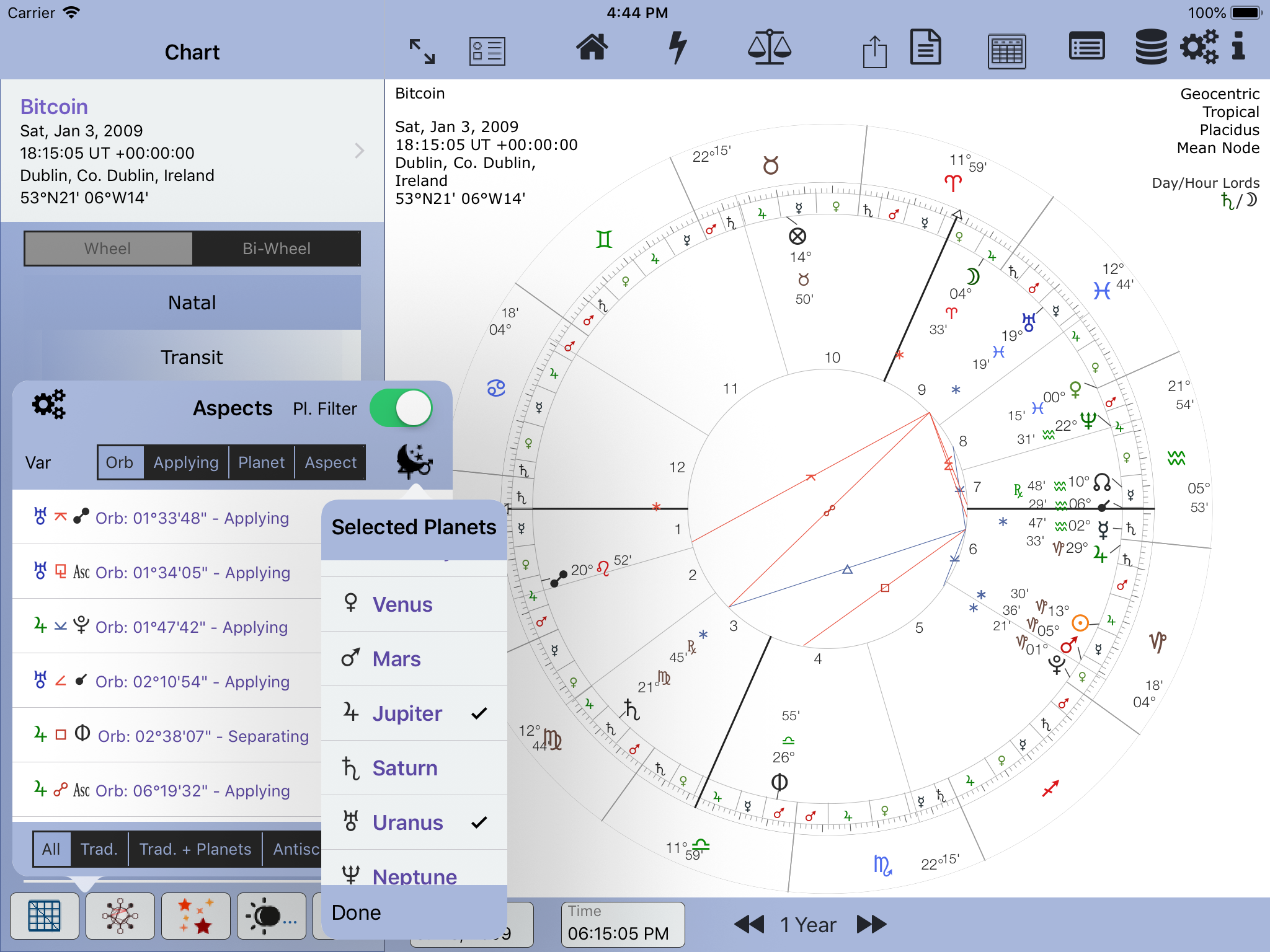 Is the Cosmobiology 90 degree dial available?

No, but there is an alternative which you may like. here are some screenshots and links: 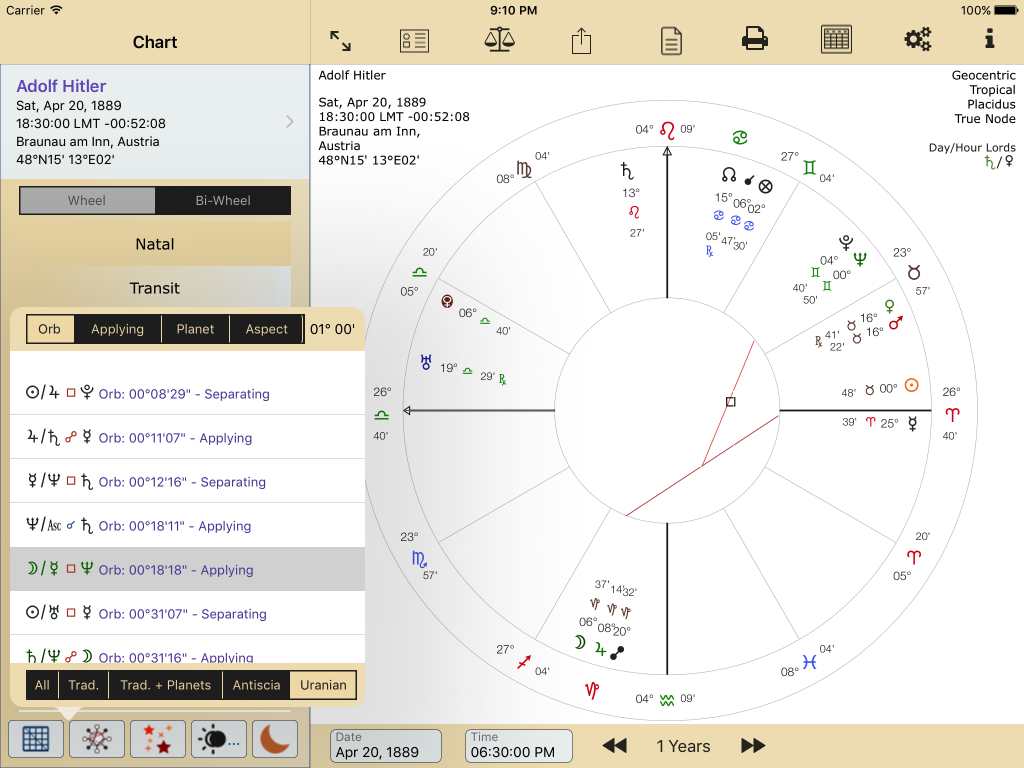 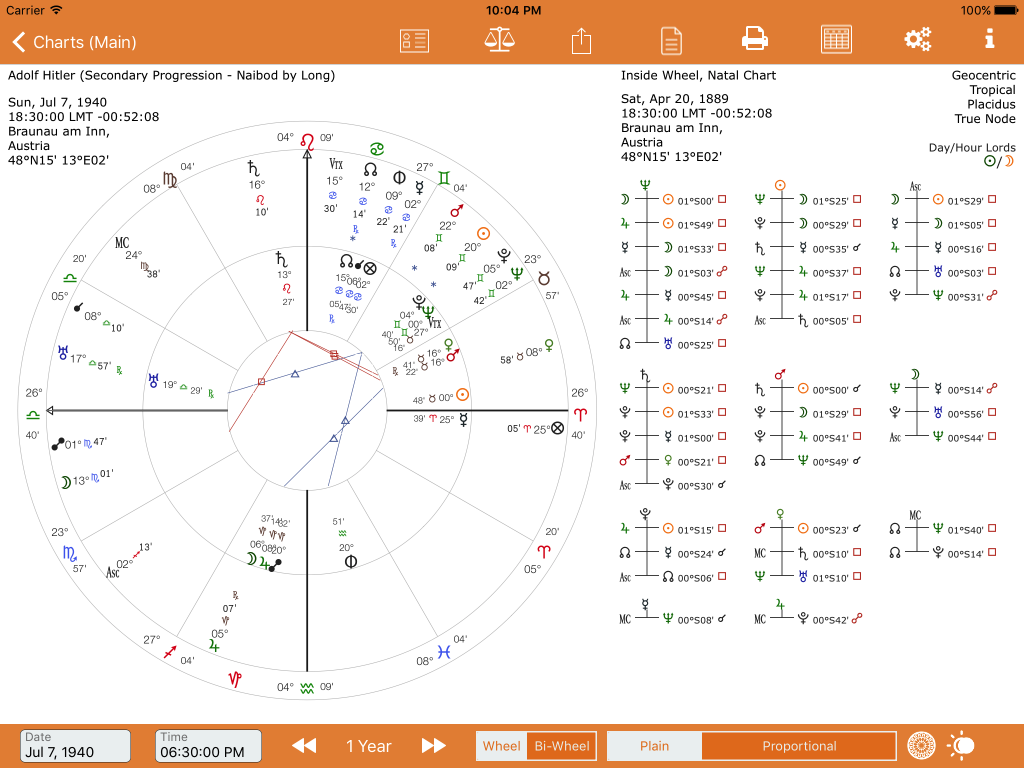 Yes, AstroConnexions is Ad free. And always will be.No analytics are incorporated into AC. Many apps send data from their app with details of when and how you use it. AC does not.

What's the best method for exporting my chart files (from other astrology apps) into AC?

Here's a summary of the methods provided by AC to import you chart files from other astrology programs. 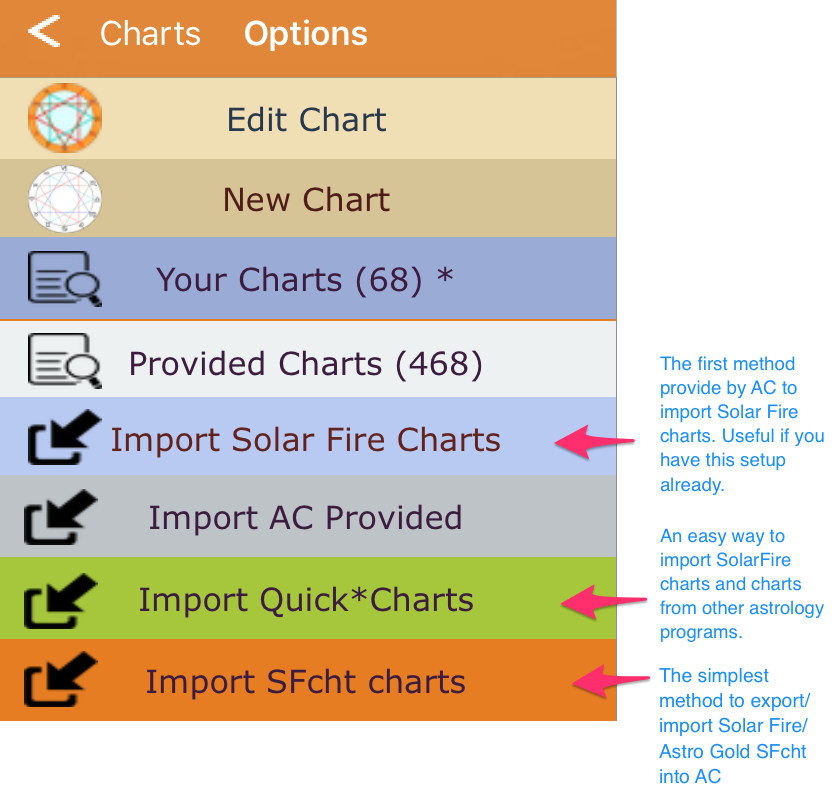 Are there individual orbs settings for Eclipse and Ingress charts?

No. They are classed as Natal/Radix charts, therefore, they use the natal chart (variable) orbs for single-wheel charts, and (fixed) orbs for bi-wheel charts. Variable orbs - this means that an orb for a square may be set at 8 degrees, whilst a sextile may be set at 4 degrees, etc. For bi-wheels, the setting is fixed often at 1 degree, so that a square orb is the same as a sextile orb.

AC's documentation refers to variable and fixed orbs. What does that mean? Variable orbs - this means that an orb for a square may be set at 8 degrees, whilst a sextile may be set at 4 degrees, etc. Used by Natal/Radix charts. An antiscia chart may have a fixed or variable orb setting. For bi-wheels, the setting is fixed often at 1 degree, so that a square orb is the same as a sextile orb. For secondary progressions and solar arc, etc. This is common astrological practice, I believe.

What are Transit to Transit aspects?

These aspects are what's happening in the sky at any given moment.

What type of iPad do you recommend?

Thinking of getting an old iPad? Used iPad 2's can be bought for as little as £65.00 from eBay. The iPad 2, although a great iPad in its day is now approx 9 years old, and can't be upgraded past iOS 9.35.AC is a somewhat sluggish on an iPad 2 but still usable - with no features missing.My thinking is that when it becomes too difficult to support an iPad 2 (for many reasons - maybe lack of support from Apple will be the main cause) I will develop AstroConnexions 2. AC will continue to work on the iPad 2 as long as Apple allow this. AC 2 will work on more recent versions of iOS. This is speculative.Do I recommend buying a used iPad 2 for AC? No. Better to get a more recent iPad, such as an iPad Air 2. From about £145.00 on eBay. (June 2020)

Do you have a Blog?

I've got 2 iPads. Are my saved AC chart files shared?

I've got 2 iPads. Are my saved AC chart files shared? Or another way of putting it would be: if I save a chart file on one device will I be able to load it on the other? No. Each instance of the app has its own separate database. Of course AC chart files can be exported to DropBox and then imported into AC which goes some way in alleviating the lack of shared/common chart files. 1. Export AC chart files from iPad #1 to dropbox. Note AC chart files are copied to your dropbox. 2. Import AC files from dropbox into iPad #2. That's it. Done.

Do I need anything else once I've purchased AC?

No. But. A free dropbox account - which you will have to get yourself - is necessary for import and export. Get DropBox account (US)

Are there any in-app purchases or other things to buy?

No. Are there any in-app purchases or other things to buy after I have purchased AC? No.

Is there a free, demo or lite version of AC?

Can I get a free copy of AC?

Is there an iPhone, Android, MS Windows, Mac, on-line or Linux version of AC?

No. iOS, iPad onlyBut, when iOS merges with the Mac OS a version for the Mac may happen.

How many people are involved in programming/developing AC?

One, me. Roger Pearson. It keeps things simple.

Are any Reports or Analysis of charts or aspects available?

No chart analysis, but a later version, ver 2.26 will have aspect analysis for progressed and directed charts to the radix (not every aspect though). AC Knowledge Base - Reports/Analysis

Can I use AC on the iPhone?

No. AC is specifically designed for the iPad in landscape orientation.

Where can I find the Decans? 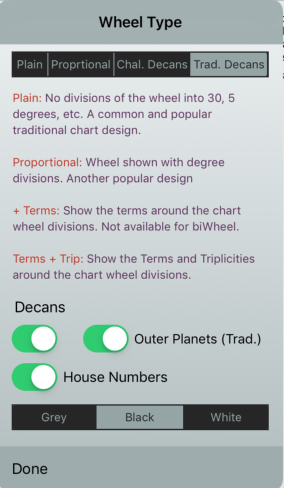 Updating AC from the Apple App store. Will I lose any data?

Only the AC app is updated. Your data, settings and charts do not get altered.

Once installed or updated via wi-fi from the Apple app store AC does not require wi-fi or to be connected to the internet, except for: and the various web links to other web sites for help/explanation, mainly skyscript. http://www.skyscript.co.uk/ This is possible because AC connects to a SQLite database on your iPad to store and retrieve data and does not rely on external servers

Can I purchase AC directly from the developer? Or from another web site?

No. AC can only be legally purchased via the iOS Apple app store. For those interested Apple take 30% of the selling price, and then there's VAT if applicable.
Go to Top
We use cookies to ensure that we give you the best experience on our website. If you continue to use this site we will assume that you are happy with it.OkNo