Historical natal charts is a post inspired by John Frawley’s lecture on Culpeper’s natal chart and subsiduary charts such as Solar Returns.

John offers a series of lectures on Horary and Natal astrology at very reasonable prices. Available from his website. Please note I have no financial or affiliate connection or otherwise with John Frawley.

I recently bought and downloaded Lectures 5-8 which consists of mp3’s and the relevant chart pdf’s, etc. These lectures are immensely enjoyable and would be of interest to any traditional astrologer. Recommended. Anyone who has read his books or his Apprentice magazine should know what to expect.

John deals with the 1634 secondary progressed chart of Nicolas Culpeper (18 October 1616 – 10 January 1654) – the famous astrologer and author of the never-out-of-print book Complete Herbal (1653). After examining the chart and one of the main natal aspects Sun opposite Saturn, John looks at the secondary progressions of 1634 and the significant event of that year for Culpeper. Which was:

Culpeper was on his way to meet and elope with his love. He was met by someone who informed him she had been struck by lightning and was now dead!

He then moves on to examining Culpeper’s Solar Return of 1633 in detail with a prominent place given to the Part of Fortune (POF) and the Part of Spirit (POS). Naturally, this examination also looks at the Solar Return’s relationship with Culpeper’s natal chart.

He continues with an examination of various Lunar returns around and before the tragic event.

He argues the following points:

And that’s just a few of his interesting discussions.

Solar Return – Part of Fortune and Part of Spirit.

John recommends using the Natal chart’s POF and POS and casting their places from the Solar Return ascendant. His name for this is Natal Arc Parts. He states that William Lilly did this. AstroConnexions has this capability as can be seen later in this post. He also insists that the diurnal or nocturnal considerations should not be taken into account when calculating these parts ie they should not be reversed depending on whether the chart is a day or a night chart.

He refers to the POS as the Part of Abundance, and the Super Sun.

I won’t describe any more from the lectures as I don’t want to disclose too much and spoil the experience in listening to John. There is much to learn and discover in his lectures. 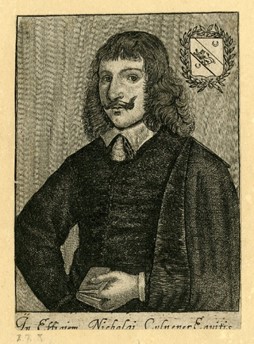 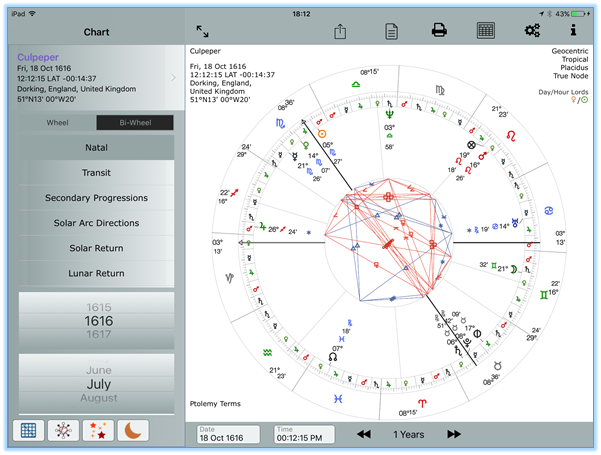 The Ascendant given in the lecture chart is 3:14 Capricorn, AstroConnexions gives 3:13 Capricorn. The Astro Data Bank website gives 7:12 Capricorn. 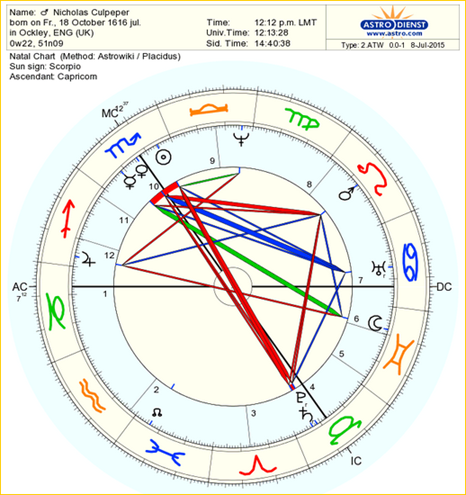 Using the Solar Fire Gold (Windows) search capabilities, I brought up Culpeper’s supplied chart. Looks like they have the incorrect Gregorian Date. 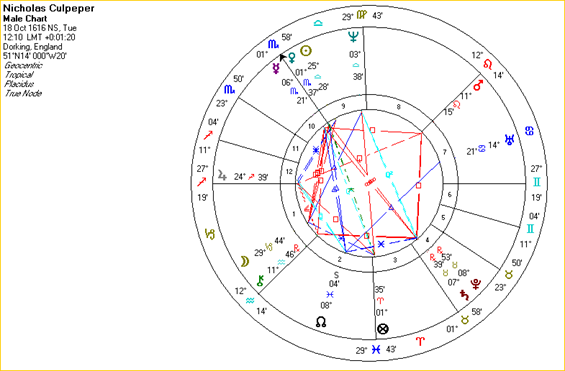 We now have chart agreement with the Asc given by John, AstroConnexions and Solar Fire. The odd one out is the one from Astro Data Bank.

In showing these charts from different vendors, I’m not trying to show which one is the best or the most accurate. Although that is something to be considered. Rather I’m showing the importance of checking dates, times and other factors. 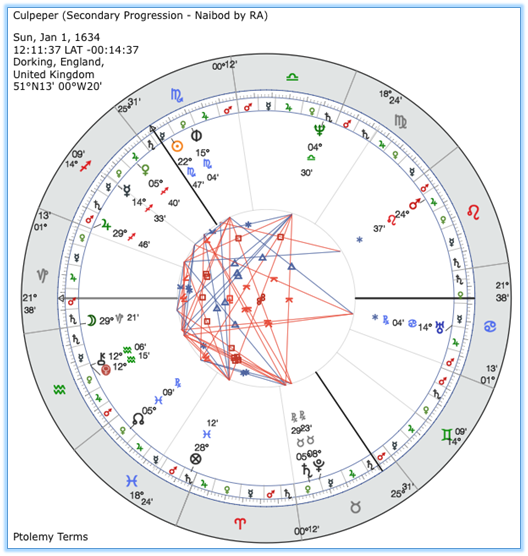 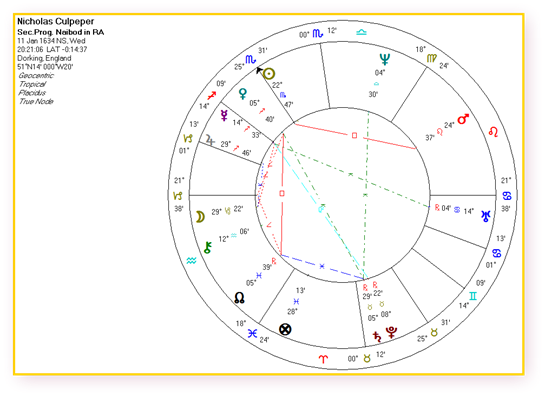 When casting a secondary progressed chart John recommends selecting Naibod in RA or Mean Solar Arc in RA (both are the same). AstroConnexions uses zodiacal longitude. The difference is almost immaterial for the dates under examination.

John also talks about the part of fortune and part of spirit – both are shown in the AC natal and progressed chart and are calculated in the usual way, ie not using their natal positions.

Saturn progressing to an opposition of the radical Sun

As noted earlier one of John’s main topics is the close natal Sun-Saturn opposition. As an interesting note: the main progressed aspects to natal for 1634 are shown below (screenshot from AC) – read from left to right shows Saturn progressing to an opposition of the radical Sun. Something which is not mentioned in his lecture as far as I can recollect. 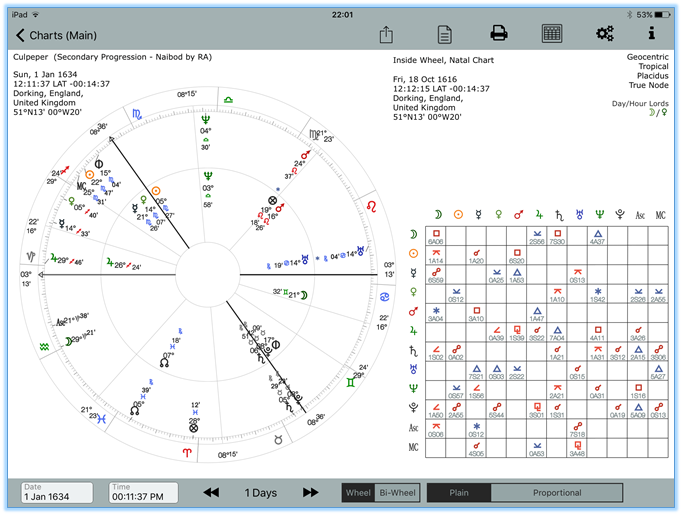 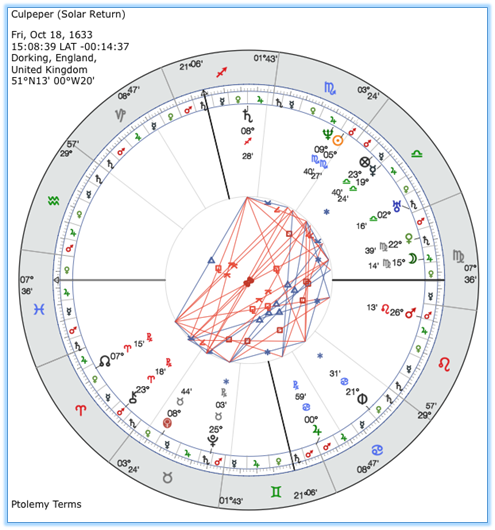 This chart shows the POF and POS in the same positions as shown in the Mercurius Solar Return chart of 1633.

I hope that I have been able to show that AstroConnexions can be used successfully to calculate historical astrology charts of various types.

Mercurius – the astrology software John mentions in his lectures: